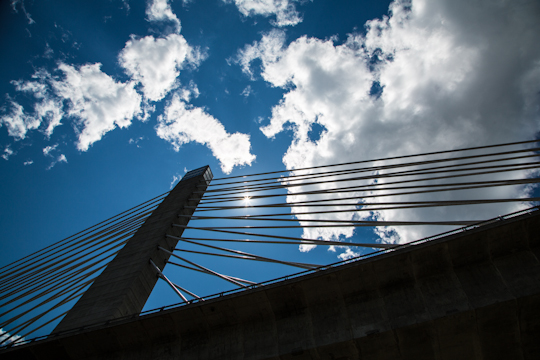 As we head out of the Bar Harbor area and towards New Hampshire we come to a sign that says, “Fort Knox”. We looked at each other very confused and say, “I didn’t think Fort Knox was in Maine?” So, we turned in and decided we should go check it out. After all, what’s a road trip good for if you don’t discover something new along the way! First thing we notice is how open it is…not exactly locked down like Fort Knox. Come to find out, this is the first Fort Knox but not the one with all of the gold….dang; we could have tried out our Bonnie and Clyde skills! The Fort Knox with the gold is in Kentucky. This Fort Knox is on the Penobscot River in Prospect, Maine and is known for its architectural features and its history with cannon batteries. 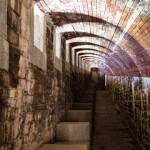 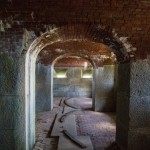 For us, it was a great way to stretch our legs before a long drive and revert back to 8 year olds for a while. Nothing better than creating your own reenactments! 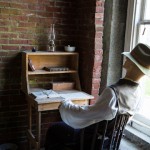 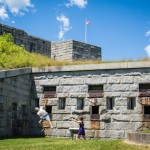 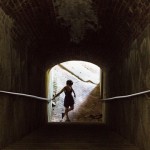 Super Woman on the grassy knoll… 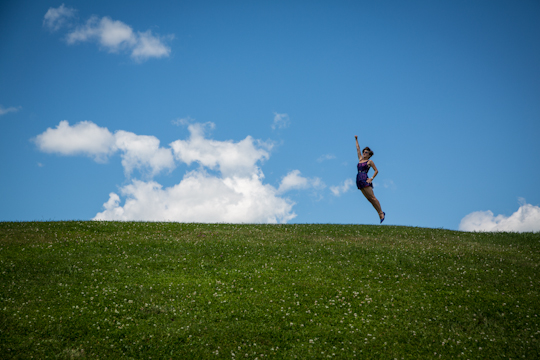 The Penobscot Bridge and Observatory overlooks the Fort and gives some great views of the river (and it’s cheap)!  The RV looks so tiny from up here and the Smart car looks like a toy! 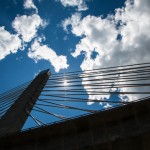 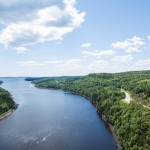 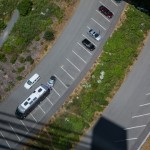 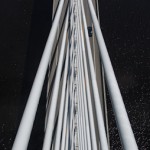 There were so many cute little towns along the drive, it was hard not to stop and want to explore each one! We spent more time than we anticipated playing at the Fort and we really wanted to make it to Portland, ME for dinner. 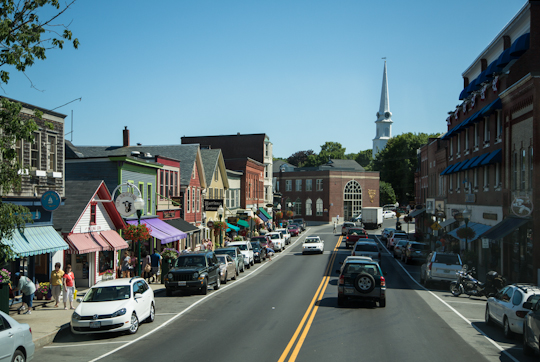 We made it to Portland for dinner and found a great little vegetarian place called The Green Elephant. It’s mostly Asian influenced food which we love, so we’re happy! 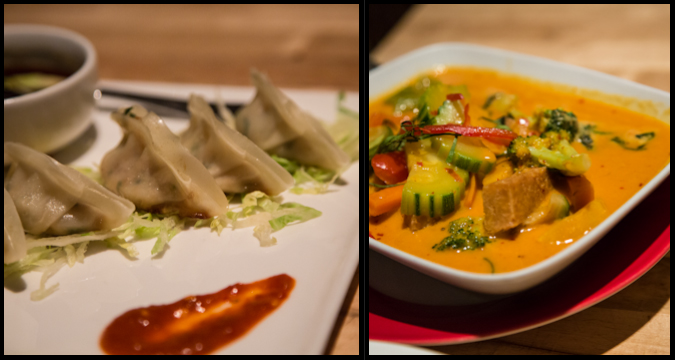 We spent the rest of the night wandering the city and of course stopped off at the Whole Foods to stock up. That’s one thing we really miss on the road; really great grocery stores! Farmers Markets are fantastic but they are only seasonal and we just keep missing each town’s peak growing season!

We made it safe and sound. We really had a no idea what to expect from New Hampshire and definitely didn’t realize that their beaches were so popular! This random weekday looks like spring break weekend in Hampton Beach! 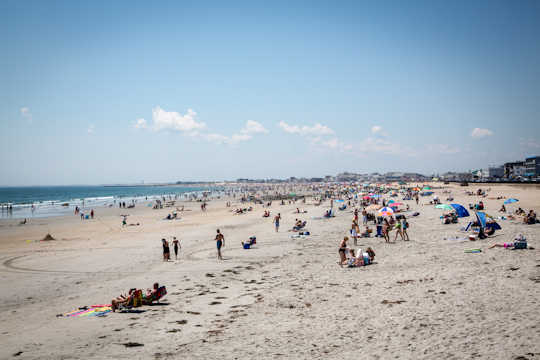 We sat for hours just watching people play games, build sandcastles and watching the lifeguards blow their whistles at someone every other minuet. The current must have been really strong because they didn’t want people out further than 15ft from shore. 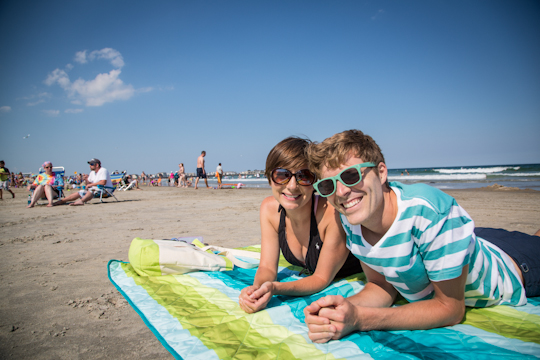 We have been bouncing back and forth on facebook with TalkCampingNH and they decided to hang out with us for an evening! Chuck and Cindy are big campers and have been camping and RV’ing for years! They write a lot of campground reviews on their facebook page and are working on a website. They visit so many campgrounds they figure they should share their discoveries. One thing we couldn’t believe is how long they have been camping and yet didn’t know how to play Mexican Train! 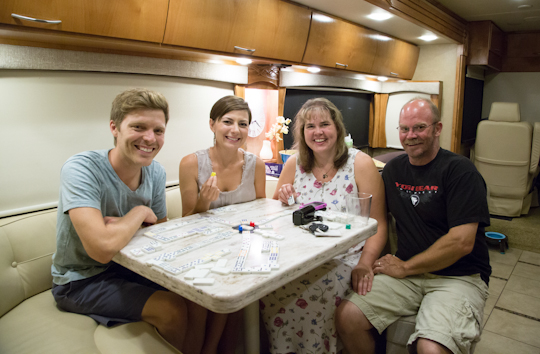 When we first started out our camp neighbors Ray and Jeannie insisted we learn and told us it was a staple at campgrounds. They were right and now we were able to pass on the tradition! Good times! 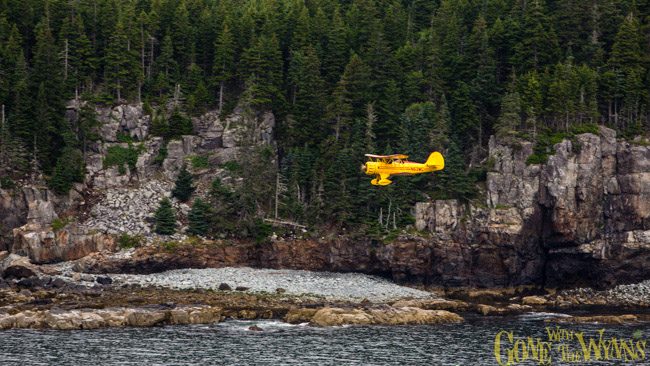 Gettin High – Acadia From Above 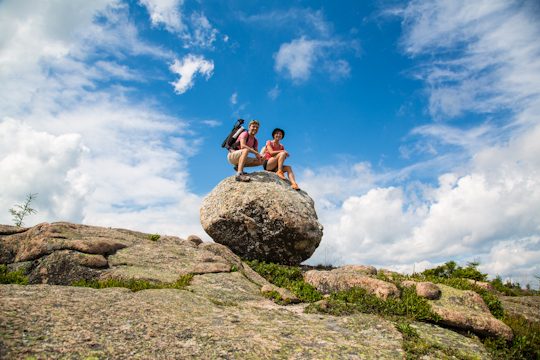 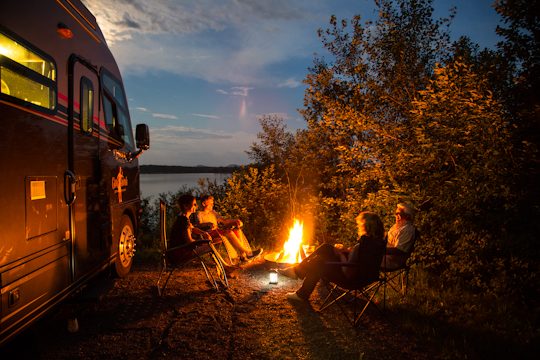 Back in Nature From Canada to Maine