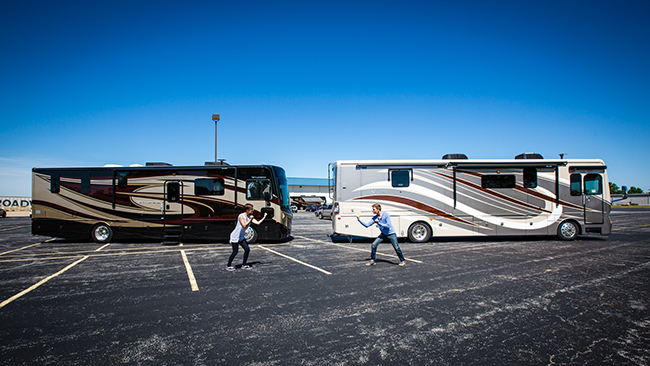 RV Smackdown – Excursion vs Discovery, Why the Huge Price Difference?

On paper these two RVs look similar enough, so where does that extra $100,000 go?  Is it really worth the extra money?  Do I need all those extra features on an RV?

These are all common questions we get from new and seasoned RVers alike when it comes to purchasing an RV.  We’ve taken some of these questions head-on in the video below by comparing a 2015 Fleetwood Excursion 35E vs. the 2015 Fleetwood Discovery 37R…it’s what we like to call an RV SMACKDOWN!

We chose the Excursion vs. the Discovery because they’re both Fleetwood RVs that share lots of features, and when comparing these two RVs on the website they don’t seem hugely different.  They both have nice floorplans, they have all the standard stuff like beds, toilets, kitchens, etc.  They’re both rear engine diesels built on the Freightliner Chassis with Cummins engines.  The Excursion and Discovery may be similar enough but we feel its pretty easy to see the visual quality difference between these two RVs in the video.  To be clear its not that one RV will last longer or have less issues, its simply a difference of more expensive products and features that you get in the Discovery that aren’t offered in an Excursion (and there’s the extra 2 feet, but who’s keepin tabs?).

Detailed Comparison and Floorplans of the 35E and 37R

There are plenty additional differences between these two RVs…way more than we can cover in a video or even in this article! Below I’ve included some of the major differences along with the floorplans of each of the Motorhomes we’ve compared in our RV Smackdown. 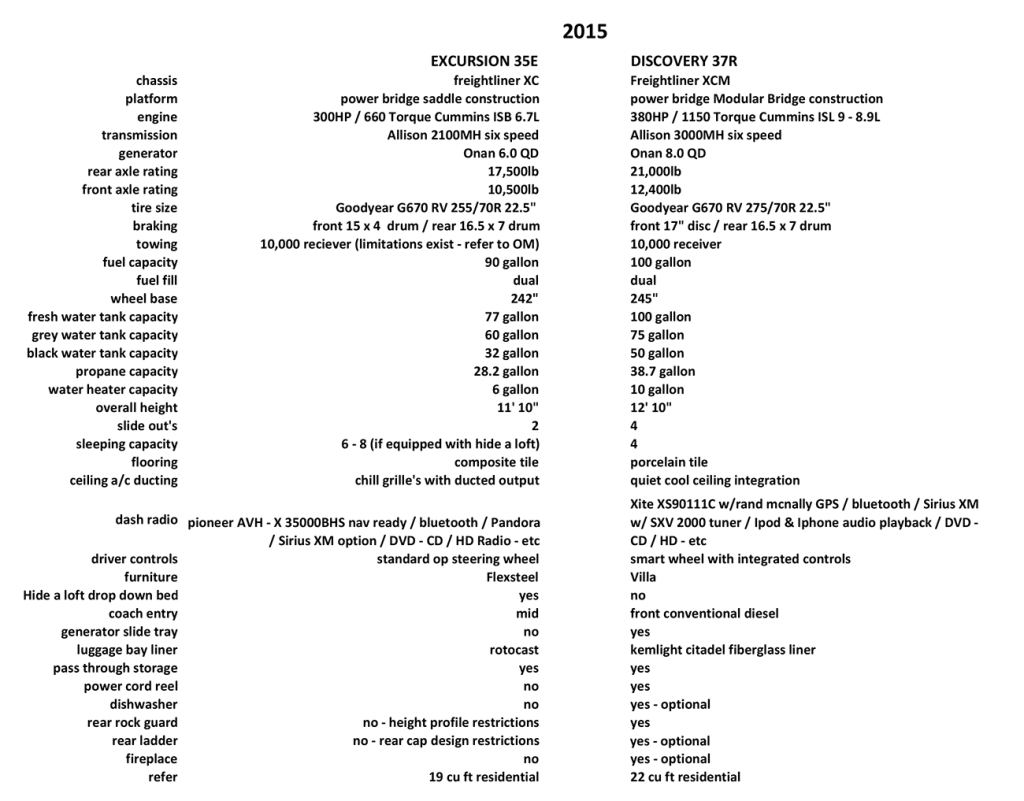 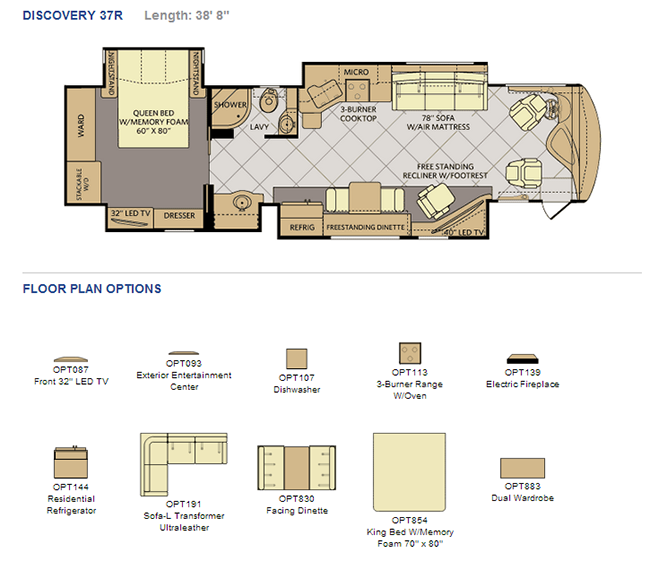 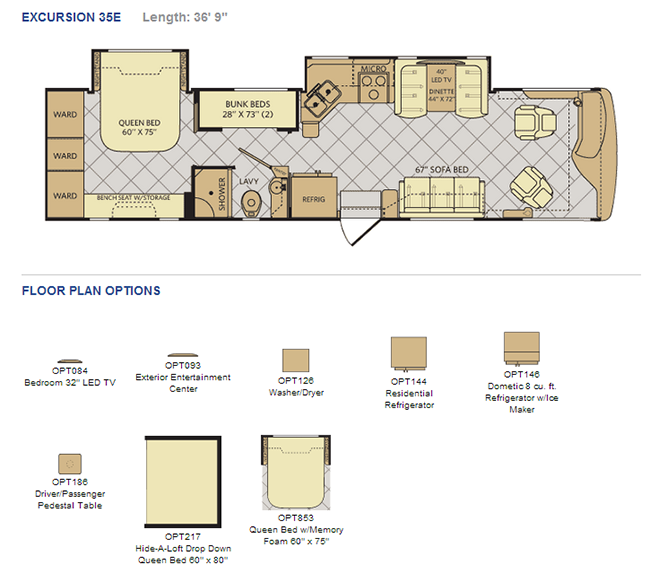 Kinda cool to see it all side-by-side right? We really like our Excursion however, compared to the Discovery it’s almost like comparing a Toyota and a Lexus…which is where a good part of that extra cash goes!

The trick is not to just compare the same brand (like we’ve done in the video) but to take this concept and put different brands against each other.  Oftentimes you’ll find that similar quality RVs end up with similar MSRPs.  Take a look at the Fleetwood Excursion 35B vs. the Winnebago Forza 34T:  the quality of materials and products used are pretty similar as are the MSRP’s and the “street price” for each.  On the other end of the spectrum try and compare the Thor Palazzo 33.2 vs the Fleetwood Excursion 33D:  at first glance they seem pretty similar but dive deeper and compare the inverters, battery bank, wiring gauge, number of inverted outlets, wall thickness, fridge, bay doors, windows, TVs, etc. Now you can see what I’m talking about. Although the MSRP is similar the “street price” of the Thor is typically less.

We first dealt with this question when moving from our 2009 Damon Avanti to the 2011 Monaco Vesta.  I couldn’t for the life of me understand why the Vesta MSRP was $100,000 more than the Avanti.  Both RVs we’re Front Engine Diesel; The Avanti is 31 feet, the Vesta is 32 feet; interior design was similar enough, exterior profile is similar…it just seemed like so much was the same!  After owning and traveling in both RVs I can tell you that extra $100,000 was worth every penny!

So where did that money go?  To be honest most of the money goes into things you can’t see or wouldn’t notice at first glance when comparing the two RVs.  Here are a few of the many upgrades to the Vesta:  Tile floors, custom cabinets, more expensive counter tops, Villa furniture, upgraded faucets/fixtures, custom dash, upgraded steering wheel, integrated awning, two A/C units with heat pump, name brand TVs, air ride suspension, custom chassis with greater load/tow ratings, larger brakes, larger tires, inverter, batteries, thicker insulation in the walls, larger convection oven, better water heater, self locking pocket doors, the list goes on and on all the way down to the minor details like how the type of wallpaper and how it was installed.

This same concept can be used when comparing the 2011 Monaco Vesta (MSRP $226,000) to our 2014 Fleetwood Excursion (MSRP $192,000).  The Excursion is 1 foot longer, has 2 slides, Sony TVs, a Magnum pure sine inverter, washer/dryer combo, more closet space, drop down loft bed, and so on.  On the other hand the Vesta has the tile floors, better awning, upgraded water heater, more expensive faucets, thermostatic shower controls, Aerodynamic design, European style interior, MCD shades, fancier dash and steering wheel.  Its crazy where $30,000 can end up and how quickly these seemingly small features add to the MSRP.  Was the Vesta a better coach?  No.  Is the quality of the Excursion worse than the Vesta?  No, actually we’ve had less issue with our Fleetwood.  Do I miss some of the features of the Vesta?  You bet we do, especially the awning and water heater!

I feel like it’s almost impossible to explain in text, it’s difficult to see the difference just comparing websites and unless you can see the RVs side-by-side it can be a challenge to remember the minute details of each coach…throw in the dealer MSRP vs. Street Price game and it’s nearly impossible to compare 2 RVs (I think “they” like it that way).  So you’re probably asking “what’s the takeaway from these ramblings?”  I guess my point is:  Although two RVs may seem similar on paper it’s really important to spend a good amount of time looking at the minor details before simply purchasing an RV because it’s less expensive or has more discount incentives.  Remember that saying “you get what you pay for?”  From our experience this rings true more than ever when it comes to buying an RV or Motorhome.

So what do you think?  Are the fancy features of the Discovery worth the higher price point?  Have you done your own RV Smackdown when comparing multiple RVs?  Share the gritty details below, we’d love to hear your take (and I’m sure the RV Mfrs. would like to hear your opinions too).