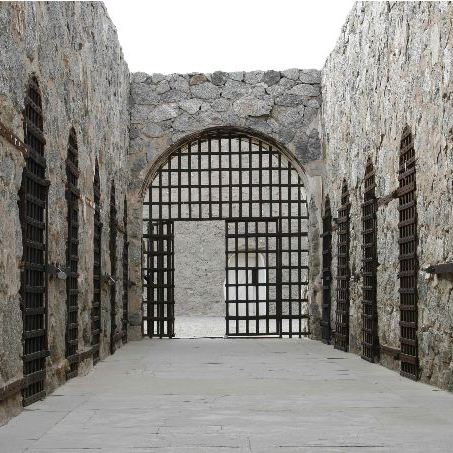 The only thing we knew about Yuma, AZ is what we watched in the movie 3:10 to Yuma. This tale of the Wild West put the infamous Yuma Territorial Prison on our must see list.

At first glance the prison seems like just another historic building.  It’s not beautiful or amazing architecture that made this place interesting.  It’s the life and stories these walls have witnessed.  As we wander the cells and learn more about the prisoners, we gain an appreciation for this little prison in the middle of nowhere.

The prison accepted its first inmate in 1876, operated for 33 years, housed 3,069 prisoners and 29 of those being women.  Sentences ranged from crimes of murder to polygamy (not a lot has changed). 111 people died while serving time but never from execution.  It was considered by the locals as “the Country Club on the Colorado” because of its modern technology such as electricity, running water and flush toilets.  In 1909, the prison transferred its last prisoner to the new Arizona State Prison in Florence.

Here comes my favorite part…From 1910 to 1914 the Yuma High School occupied the building!  I didn’t always love school, but this would have brought a whole new dimension to education! To top it off, the school’s mascot was the “Criminals” with a picture of a hardened criminal, and the student merchandise shop was known as the Cell Block.  The school is no longer at the prison but the mascot and merchandise shop still remains.

If you have any travel plans in or near Arizona, this prison and the town are worth a stop.  Just make sure you watch the movie before you go, it helps set the mood!