I could have titled this one “facing my fears” or “living out my worst nightmare and it was fun”.  Either would have been the truth but Jason was rather stuck on the shark feeding frenzy.  Plus, I didn’t really dive into the fact that a few years ago I was deathly afraid of sharks.  And then there was the little incident where our dive buddy CJ nearly lost his foot to a shark.  So, shark feeding frenzy it is.

Fakarava is a multiverse of extremes, a bridge between our two worlds and we’re in paradise no matter which way we go.  The most insane diving of our lives continues down below while we find peace and tranquility above.

To all those people who say “nothing good ever happens after dark”,  ahem, you are wrong.  Diving in the dark is sooo good, I would rate it above ice cream.  So, that pretty much settles it.

We haven’t been night diving in the ocean because…well…it’s a little intimidating.  Before we bought our boat we’d never been scuba diving on our own.  So, the past couple years we’ve been getting comfortable with learning how to dive from our sailboat and fill our tanks (which is super easy, fun and way better than any paid scuba trip we’ve ever been on).

Typically it’s just the two of us and we play it fairly safe when it comes to scuba diving in remote locations (I struggle with sinus issues so I don’t like to push it).  But, Fakarava was just too good and we had our fellow underwater adventure loving friends CJ and Giselle with us.  They have some pretty epic scuba stories from all around the world and CJ was once an instructor and guide.  When they are with us, I find myself pushing outside of my normal comfort zone.

But, I never expected to be quite that comfortable diving with hundreds of sharks!   This experience is right up there next to swimming with whales… but second of course, because nothing trumps baby whales. 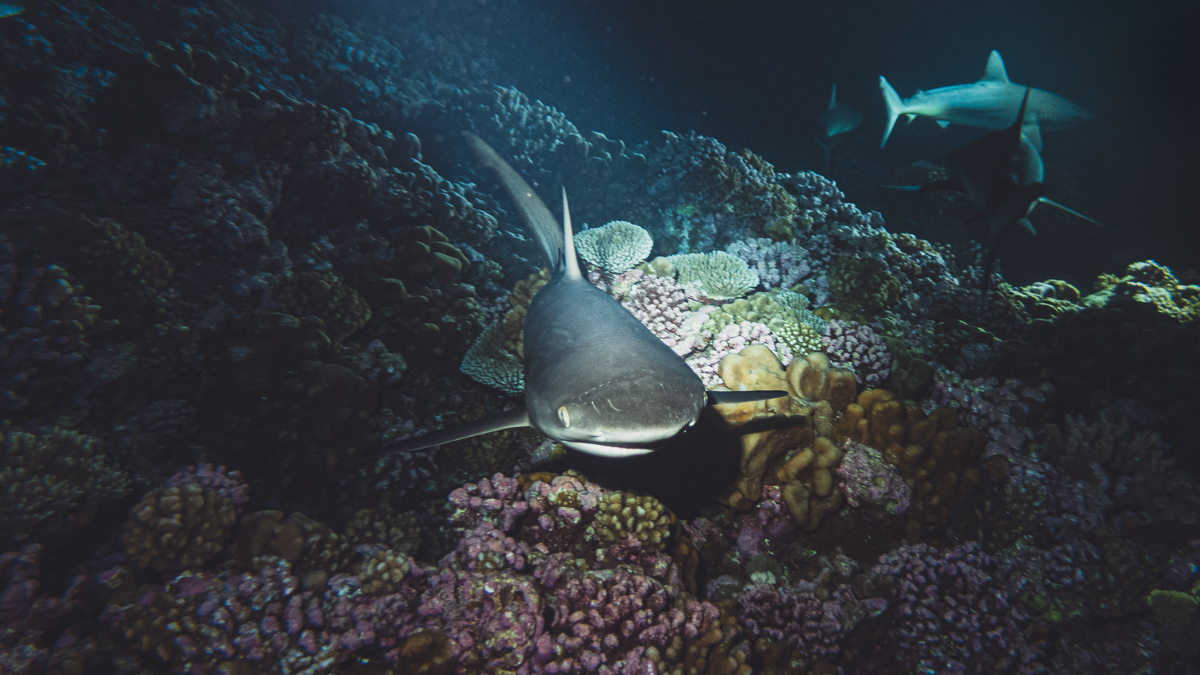 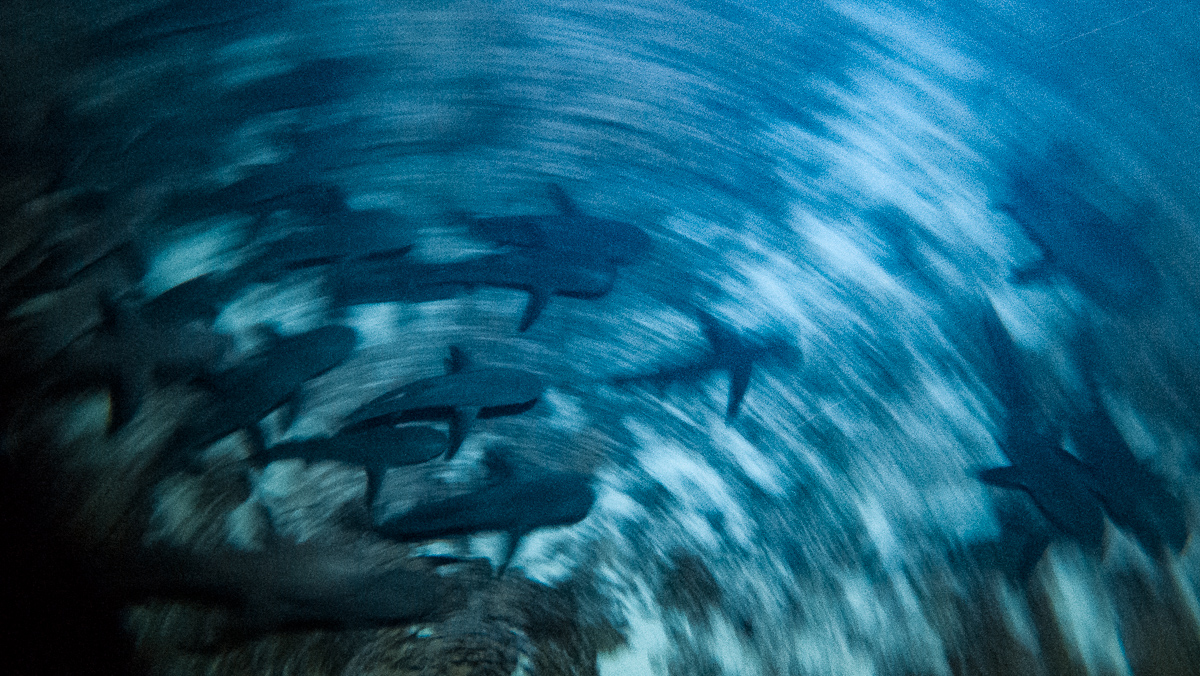 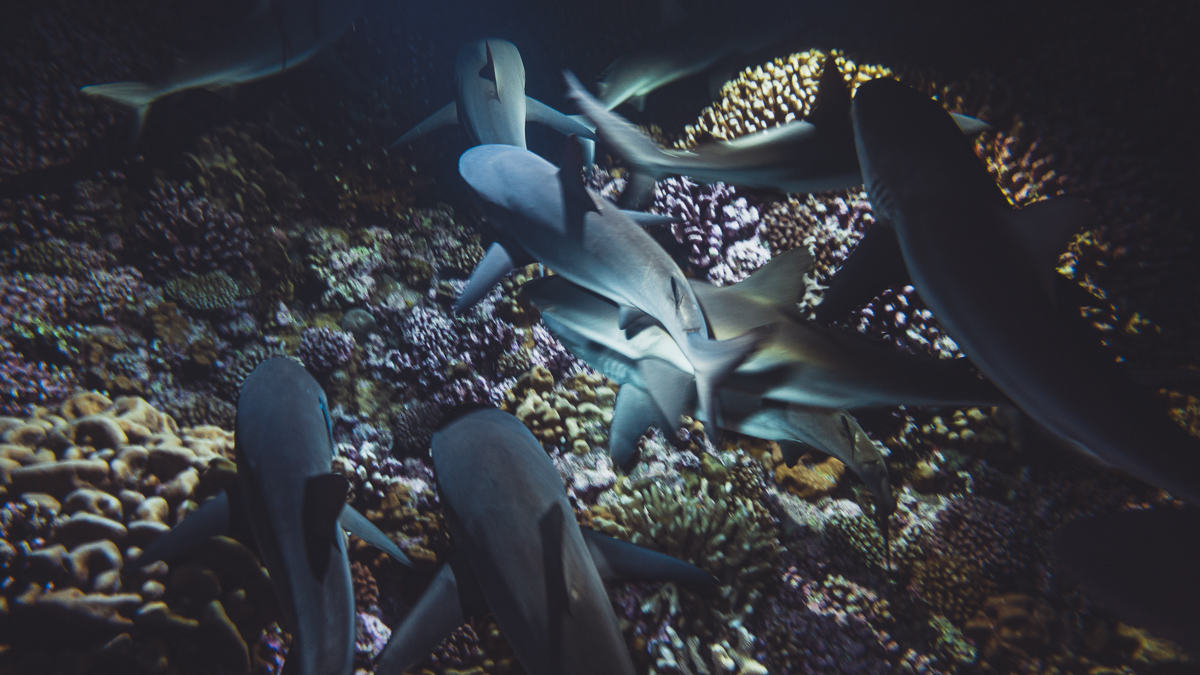 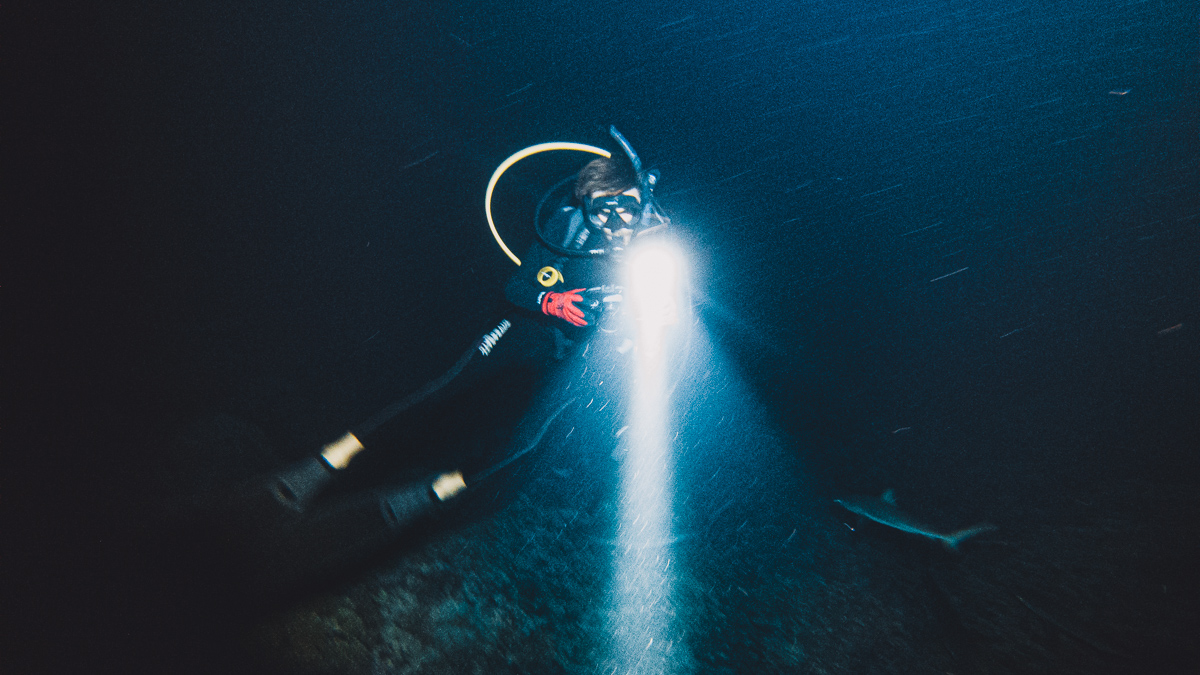 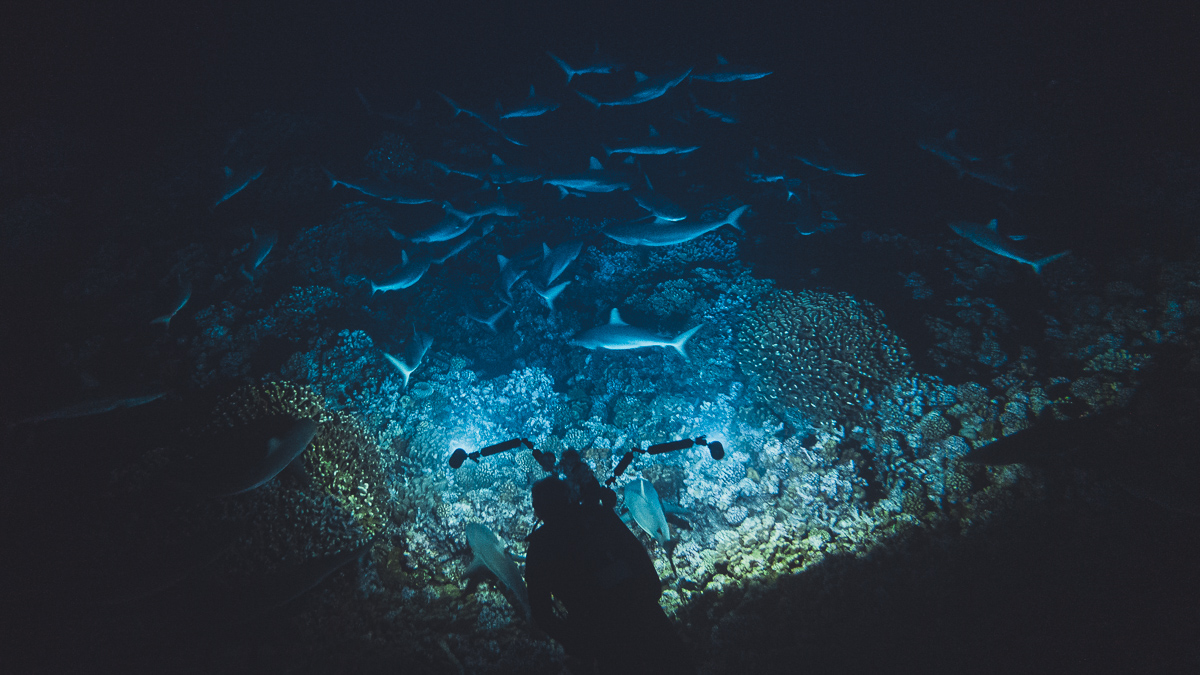 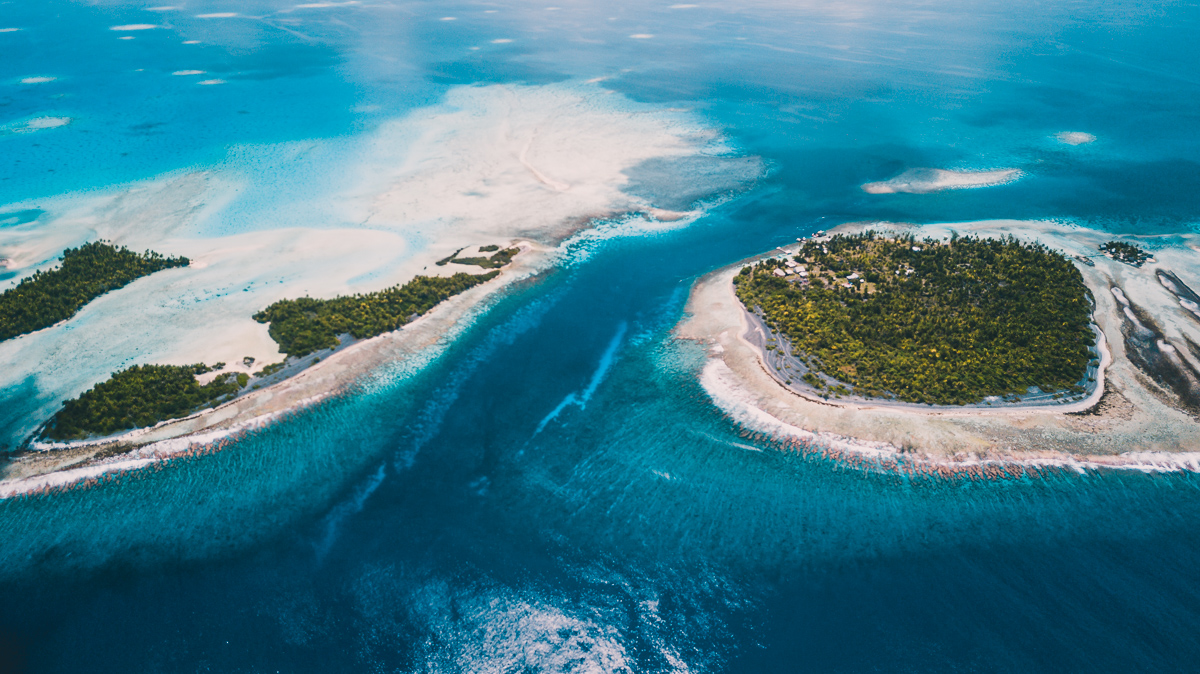 A birds eye view of the Fakarava South Pass

Sharks get a really bum rap

Sharks get a really, really bum rap.  They eat fish, not people.  Plus, they play a vital role in the health of our oceans.  Sharks are good!

I used to be terrified of sharks.  So terrified, I was hesitant to swim in the ocean.  I was never taught that sharks were good for our oceans.  All I knew is what I had learned from watching movies like Jaws and some of the stupid episodes on Shark Week…the moral of those shows is sharks are angry, man eating beasts.

I had never lived anywhere near the ocean or any body of water.  Growing up, I didn’t even know anyone with a pool.  I was 19 years old the first time I set eyes on the sea.  I had been dating Jason for a few months and he invited me to join him on a trip to California to visit his Aunt Cindy.

I was a terrible swimmer, the water was dark, cold and littered with seaweed.  Every little fish and string of seaweed had me jumping out of my skin.  I flailed around like a drowning cat for about ten minutes and that was the end of that.  I was desperately out of my element.

I’ve come a long way over the years and learning to scuba helped a ton.  But of course, moving aboard Curiosity has been my biggest accelerator.

Now, underwater is my favorite place to be! 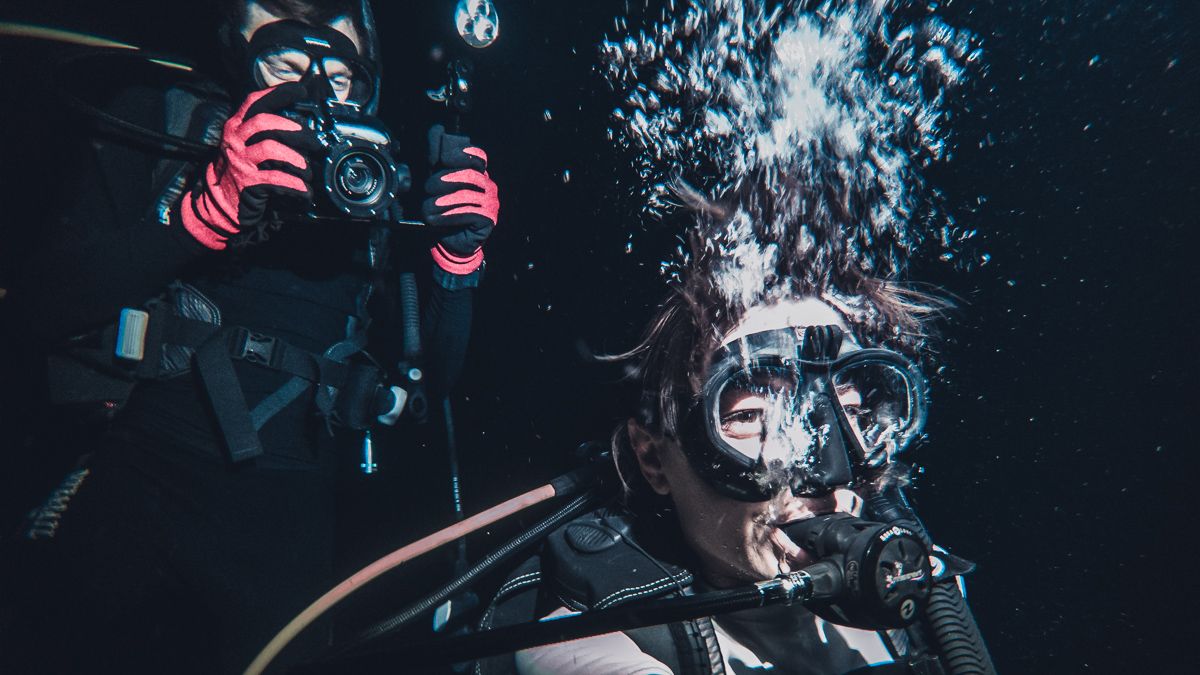 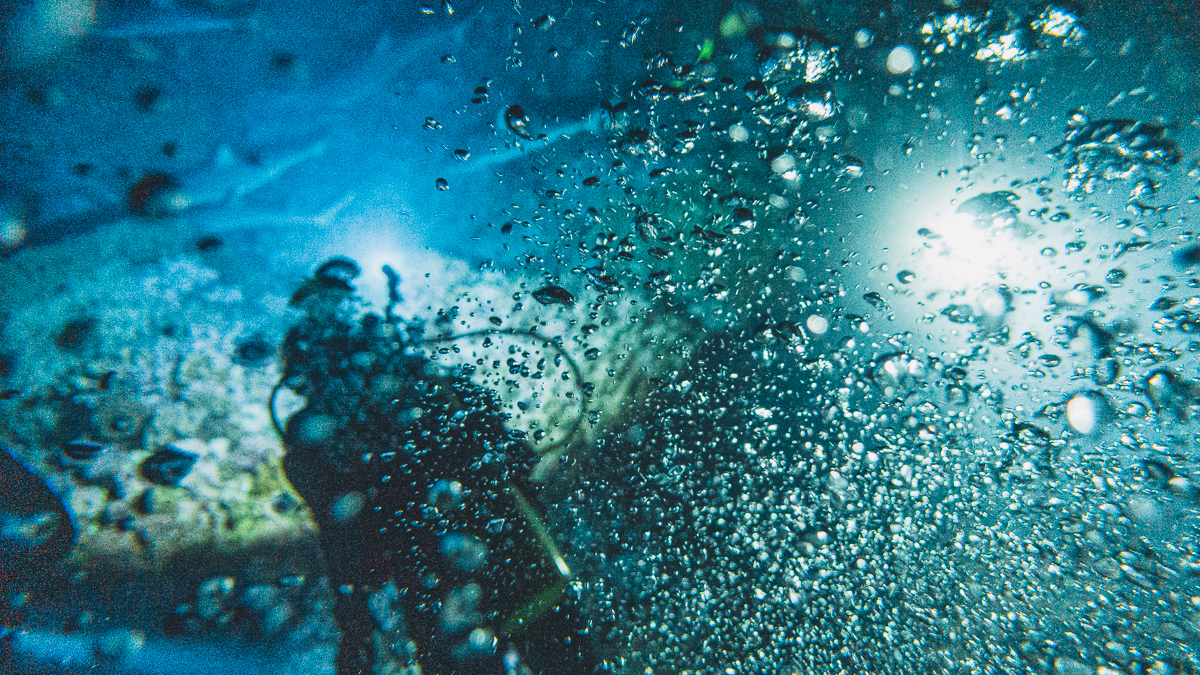 Diving into the ocean is as close to visiting another planet as we can get.  Not diving in for fear of sharks would be like choosing to never go outdoors because you are afraid of lightning.  Sure, you could get struck by lightning, but the chances are slim.

In fact, we’re far more likely to get struck by lightning than we are to being eaten by a shark!

Now, one could argue that we are taking unnecessary risks by swimming with sharks at night.  But, many shark experts would argue that our chances of getting bitten by a dog while walking down the street would be greater.

See, we could go around and round with this, but it all ends up here:  there are risks in every aspect of life.  We all have to choose what risks we’re comfortable with.

I am a risk taker, a curious driven soul and I hope I never loose the nerve to take risks.

So, I will leave you with that Hellen Keller quote again…because it is my fave of all time.  Anytime I feel fear holding me back, I recite this to myself:

“Security is mostly a superstition. It does not exist in nature, nor do the children of men as a whole experience it…Avoiding danger is no safer in the long run than outright exposure. The fearful are caught as often as the bold. Faith alone defends. Life is either a daring adventure or nothing.” Helen Keller

Life is an adventure, live it! -me 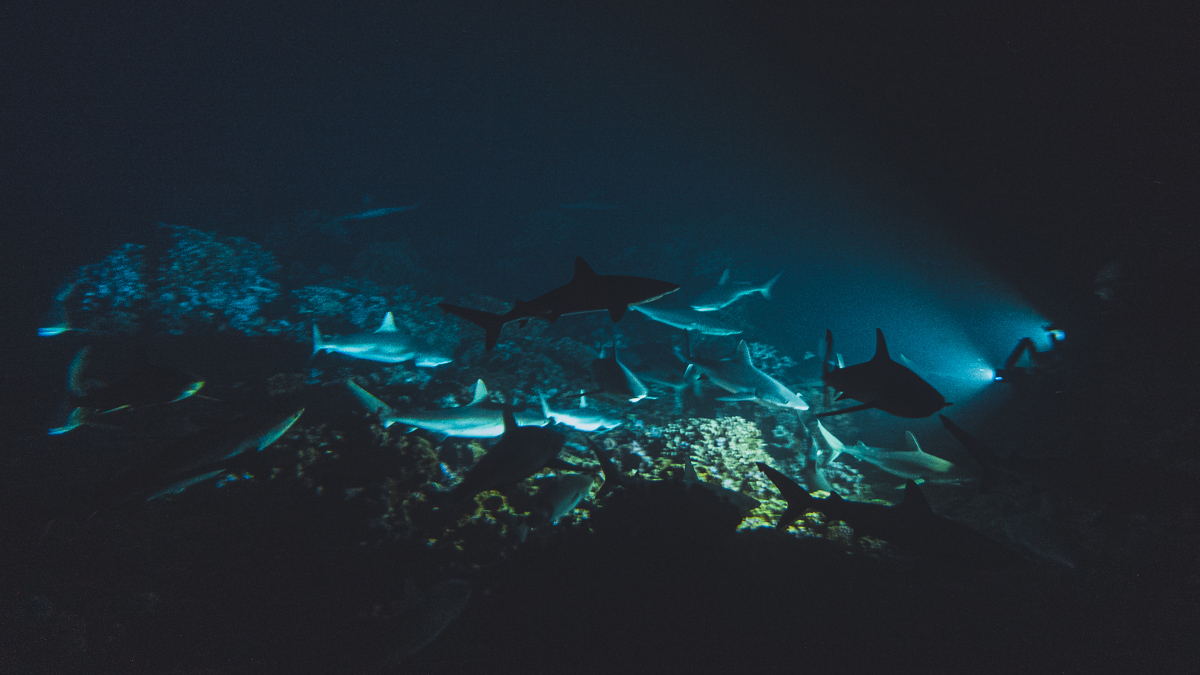 The IUCN Red List of Threatened Species is the world’s most extensively used system for gauging the extinction risk for specific plants and animals.

The International Shark Attack File is a scientifically documented, comprehensive database of shark attacks worldwide.  It is the resource I used to educate myself about shark attack myths and learn how to reduce our risk of an attack.

Ups, downs and all arounds. We share them all. If you like what you see, there are lots of FREE ways you can show your support.  Thank you for being a part of the journey!

Fakarava has single handily convinced us to upgrade our underwater camera gear.  If anyone has a favorite underwater photography housing, blog or YouTube channel, please share!  We’re officially in research mode. 😉