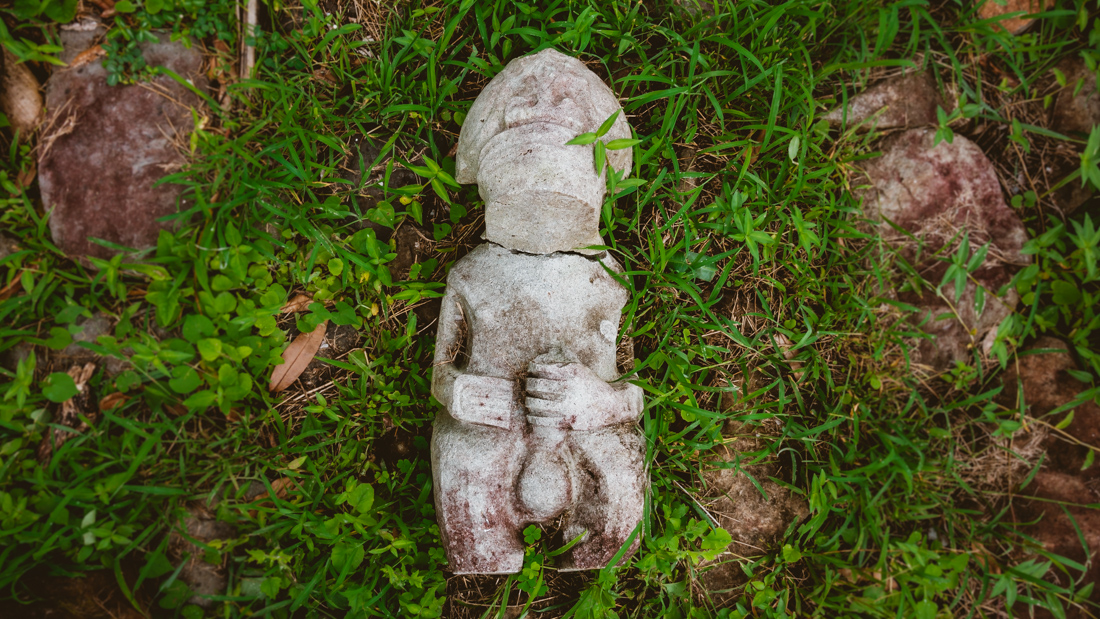 Quite the title isn’t it?  We almost went with A Million Ways to Die in The Marquesas.  But that felt a little misleading…at least post 1900’s.  But, the swarming sharks are modern day legit.

We continue to explore and learn more about the island of Nuku Hiva.  One might think, after eight years of full time travel I wouldn’t be in such a constant state of awe and wonder…but I am.  I look out onto these peaks and valleys and I am infinitely impressed. 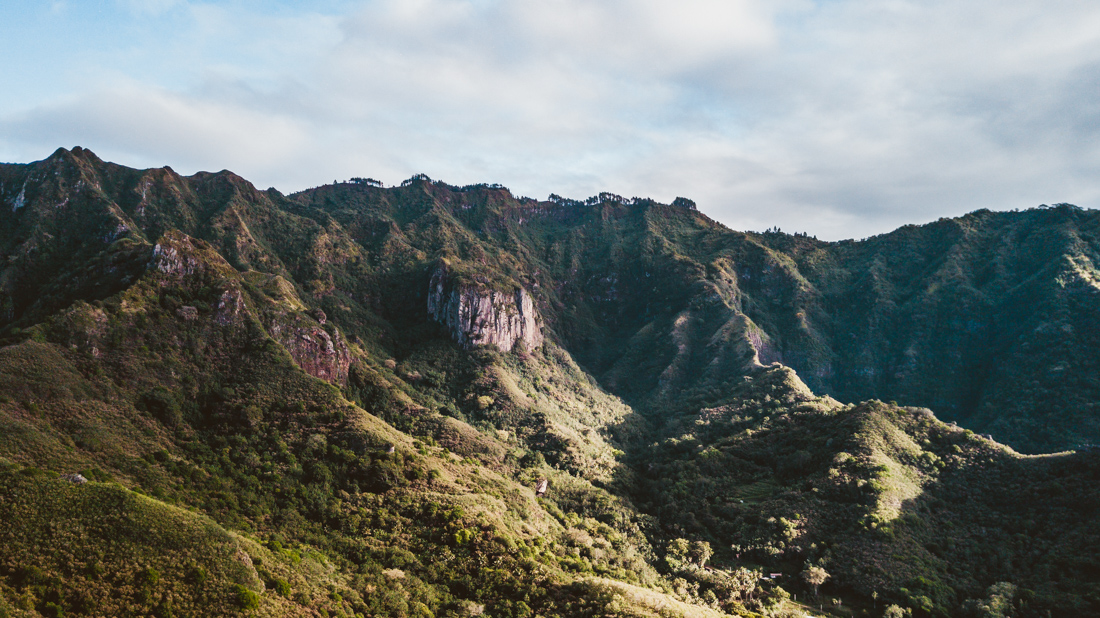 Then, I turn the other direction and see nothing but wide open ocean…and I’m impressed again.  We’re way the hell out here (took us 24 days to sail here on our modern day catamaran with GPS & Navigation) and yet, people have been making landfall on this island for thousands of years.  Surviving, thriving and leaving behind tales of gods, war, love, cannibalism and everything in between.  Those were real days of adventure! 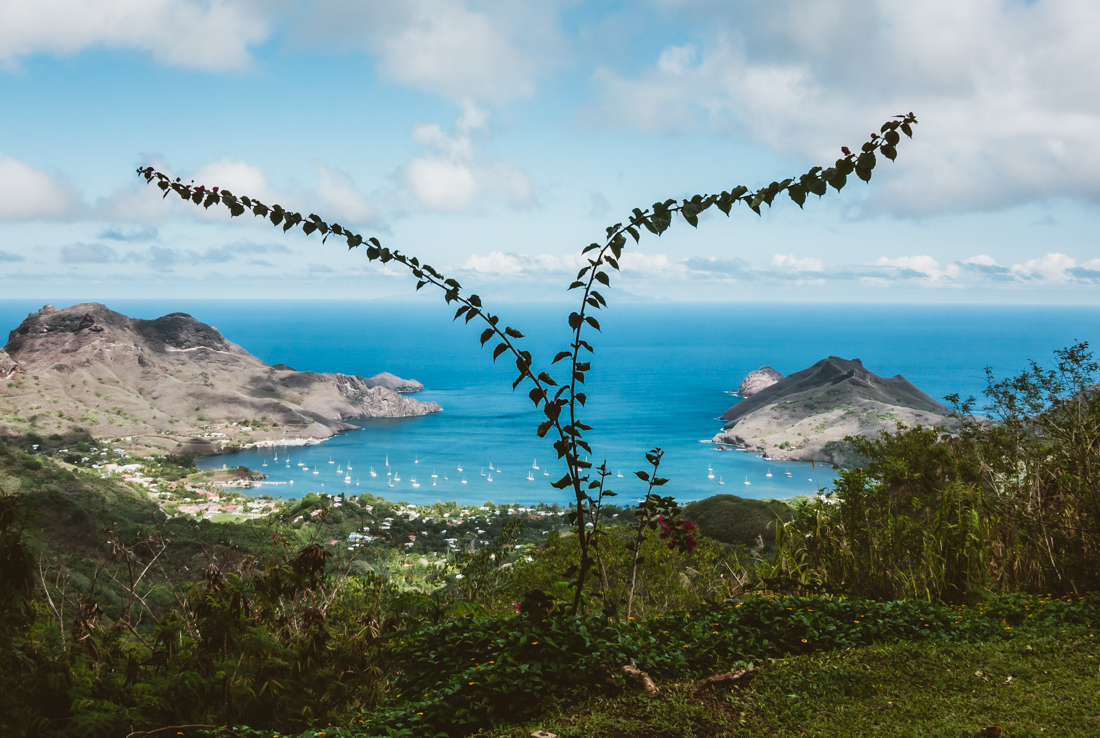 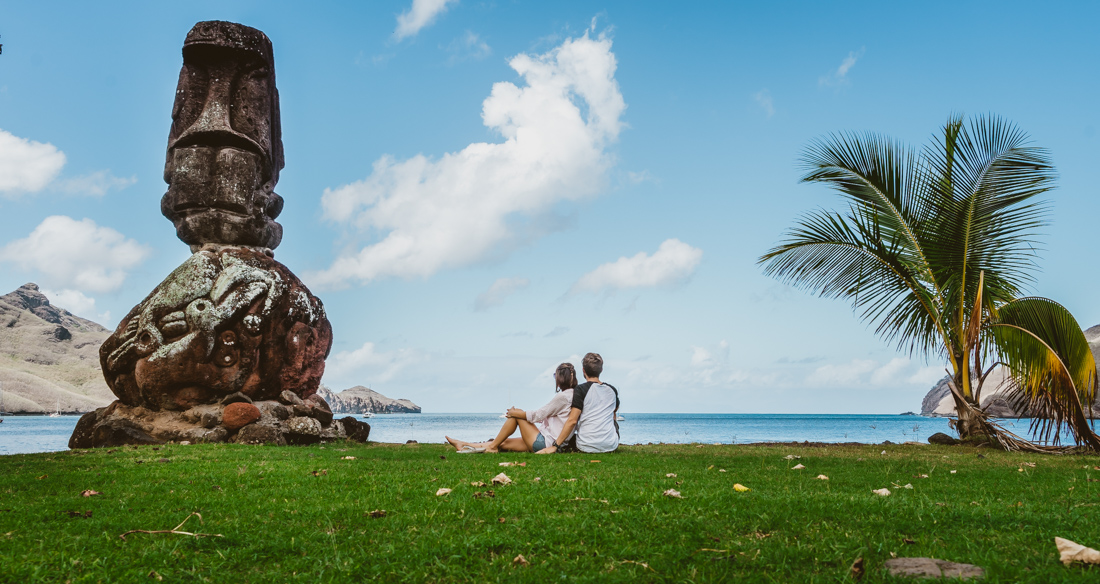 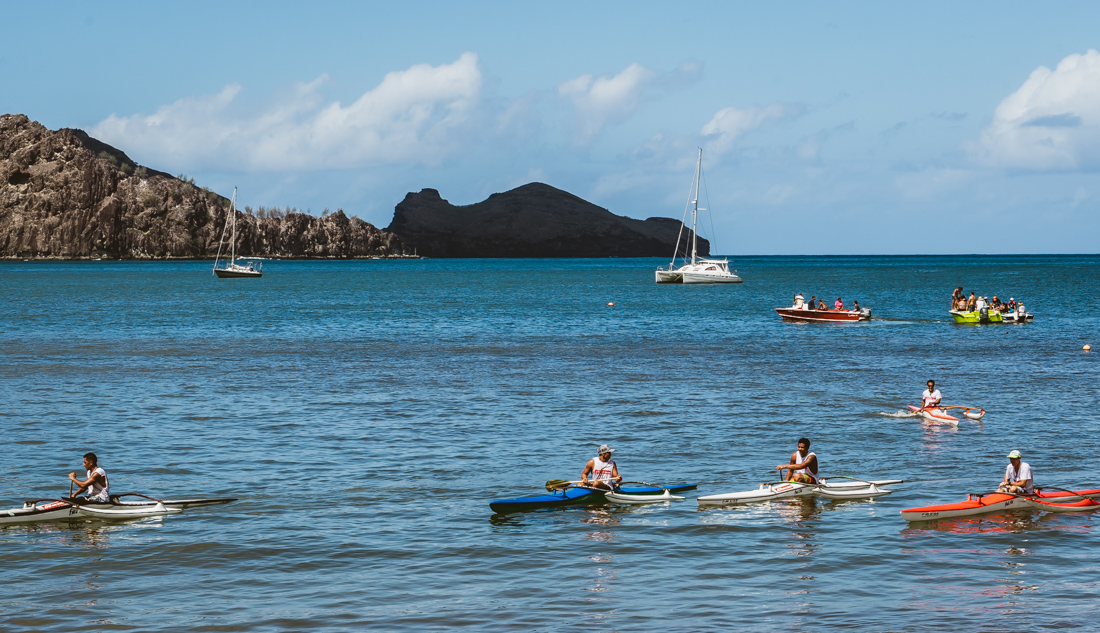 Despite my puffy eyes, groggy voice and lack of proper caffeine levels at any hour prior to 8am, the early mornings in the Marquesas are divine.  The light has a magenta hue, the air smells of salty dew and the variety of fresh veg and fruit would impress even the most avid Pike Place Market lover.

Oh, and the temperatures are perfection at dawn.  It’s just the right amount of crisp coolness but not enough to have me reaching for a pair of long pants.  Honestly, if the rest of French Polynesia is like this, they might turn this night owl into an early bird.

Given all that, it’s not completely crazy for us to get going at the crack of dawn.  So, join us as we do our best to get on “local” time as we wander around the wild world of Nuku Hiva and take in its ancient rituals and cannibalistic grounds.

I have a sneaking suspicion I’m going to sound like a broken record soon but…isn’t it a beautiful island!  Lush green places are always my favorite.  Desert landscapes are beautiful but forests and jungles are where my imagination goes to feed.

The market is open most days 6am-3pm (except Sunday), but other than jars of preserves, mango and bananas, there isn’t much of a selection.  Wednesday and Saturday are the “big” market days with Saturday (5am – 10am) being the biggest.  And when I say big, I mean there are more farmers that drive to town bringing the best of what’s in season.  It’s more than an hour drive to go up and over the mountain to this side of the island (the two ladies with the best selection traveled from the far northwest side of the island).  So, to be here and set up before 5am, the farmers start their day around 2am.  (Yikes!  Remind me not to be a farmer when I grow up.  I can’t hang.)

Sweet potatoes, deep violet red tomatoes, spring onions, the longest green beans in the world, the most perfect bunches of bok choy I have ever seen and the list goes on.  It’s such beautiful food!

Insider Tip:  Certain items like herbs, tomatoes and zucchinis can go quick.  Get there well before 8am if you want the best selection. 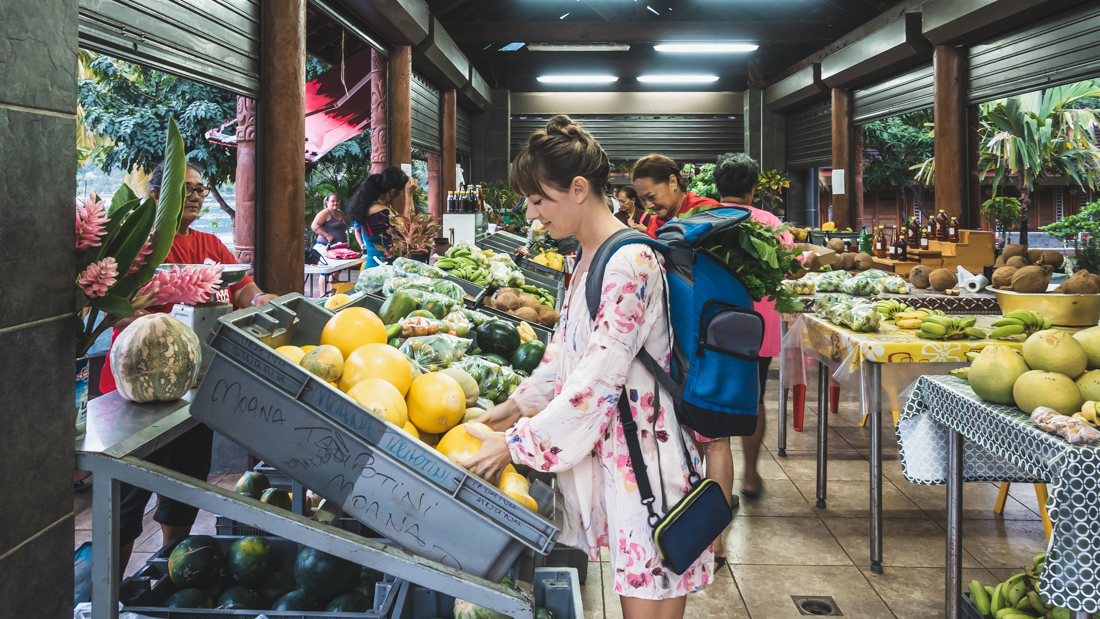 As if the market isn’t enough to satisfy, walk a few hundred feet and pick up a filet of tuna so fresh it would make Gordon Ramsey do a back flip. 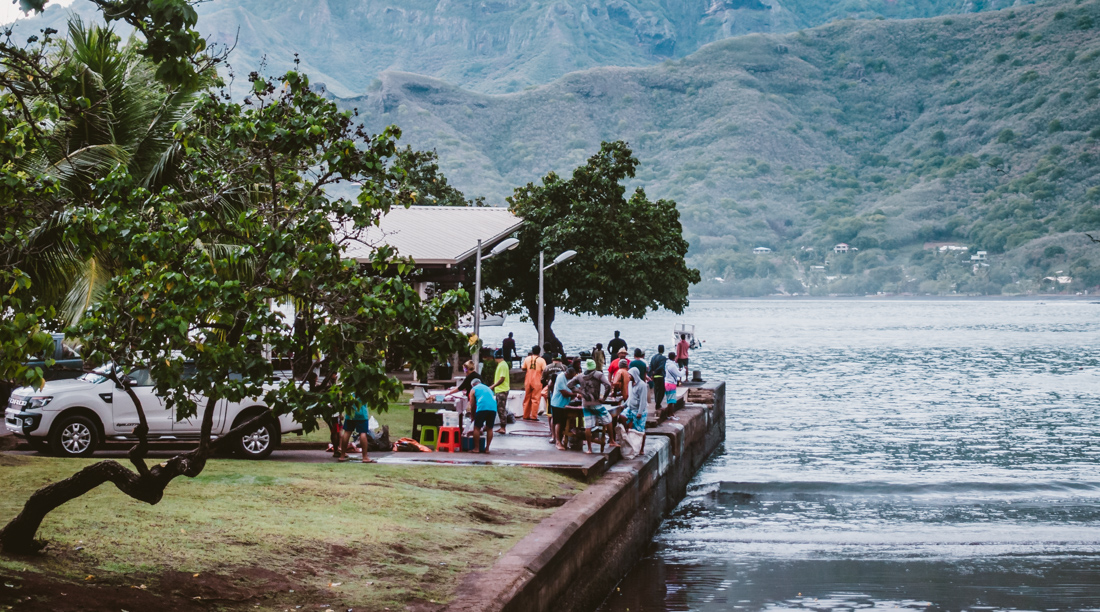 They may be WiFi poor here in the Marquesas, but when it comes to fresh food they’re wildly rich.

Insider Tip:  Avoid swimming when the fishermen are filleting. 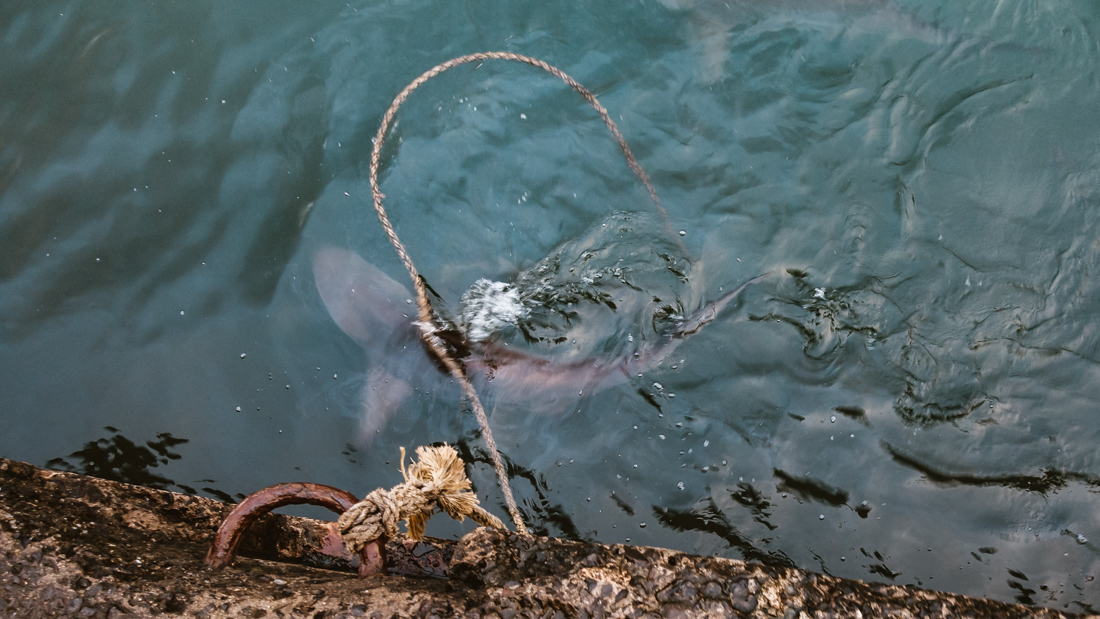 The Marquesas have some of the most impressive archaeological sites in French Polynesia.  Nuku Hiva is home to at least two very impressive and well-preserved communal sites, one being Tohua Koueva in the village of Taiohae (where we’re anchored).  Local legend says it all belonged to the war chief Pakoko before he was killed by the French in 1845. 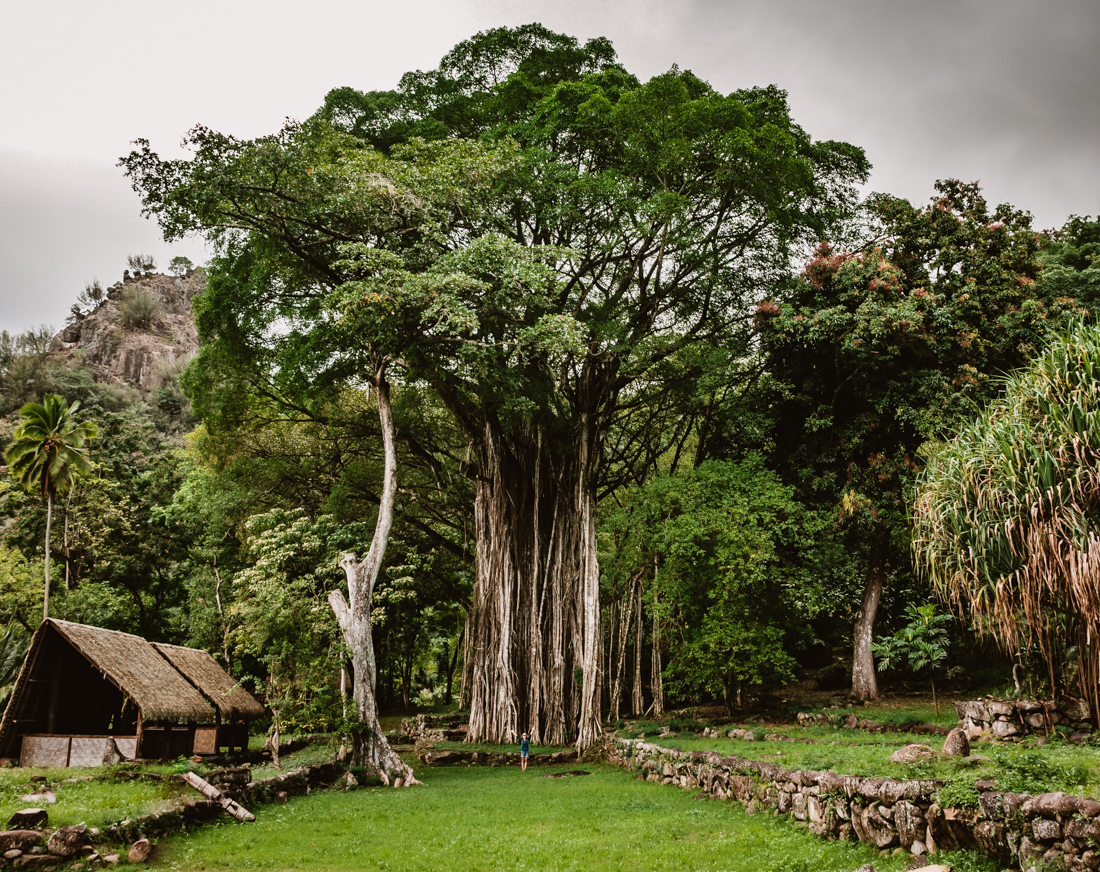 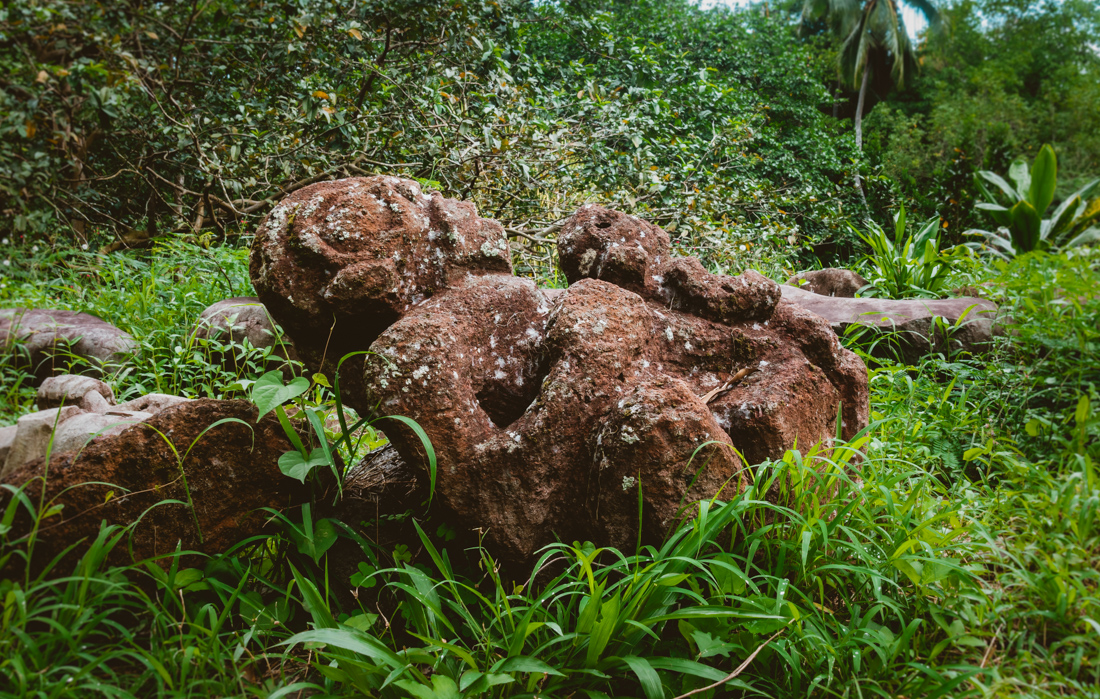 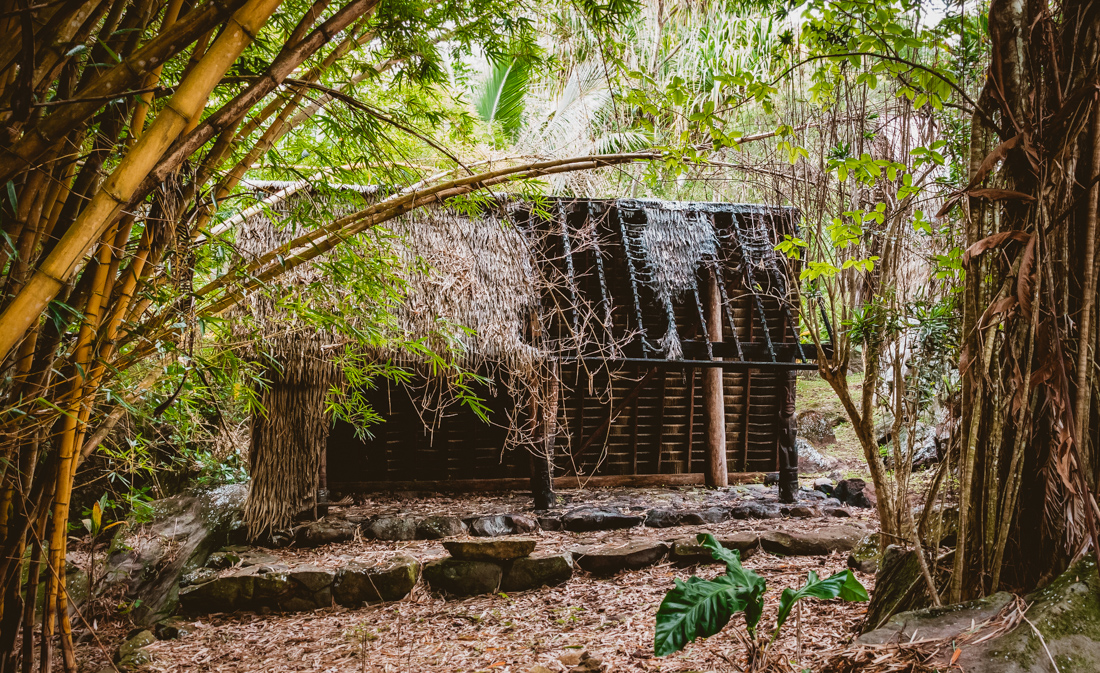 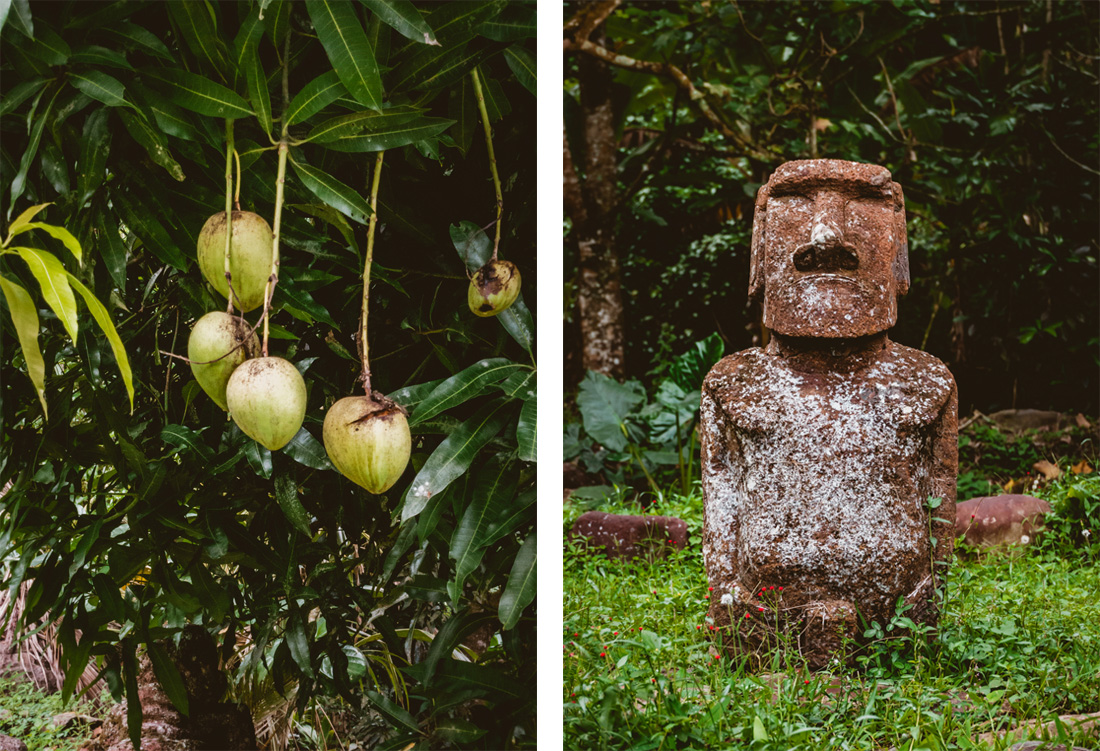 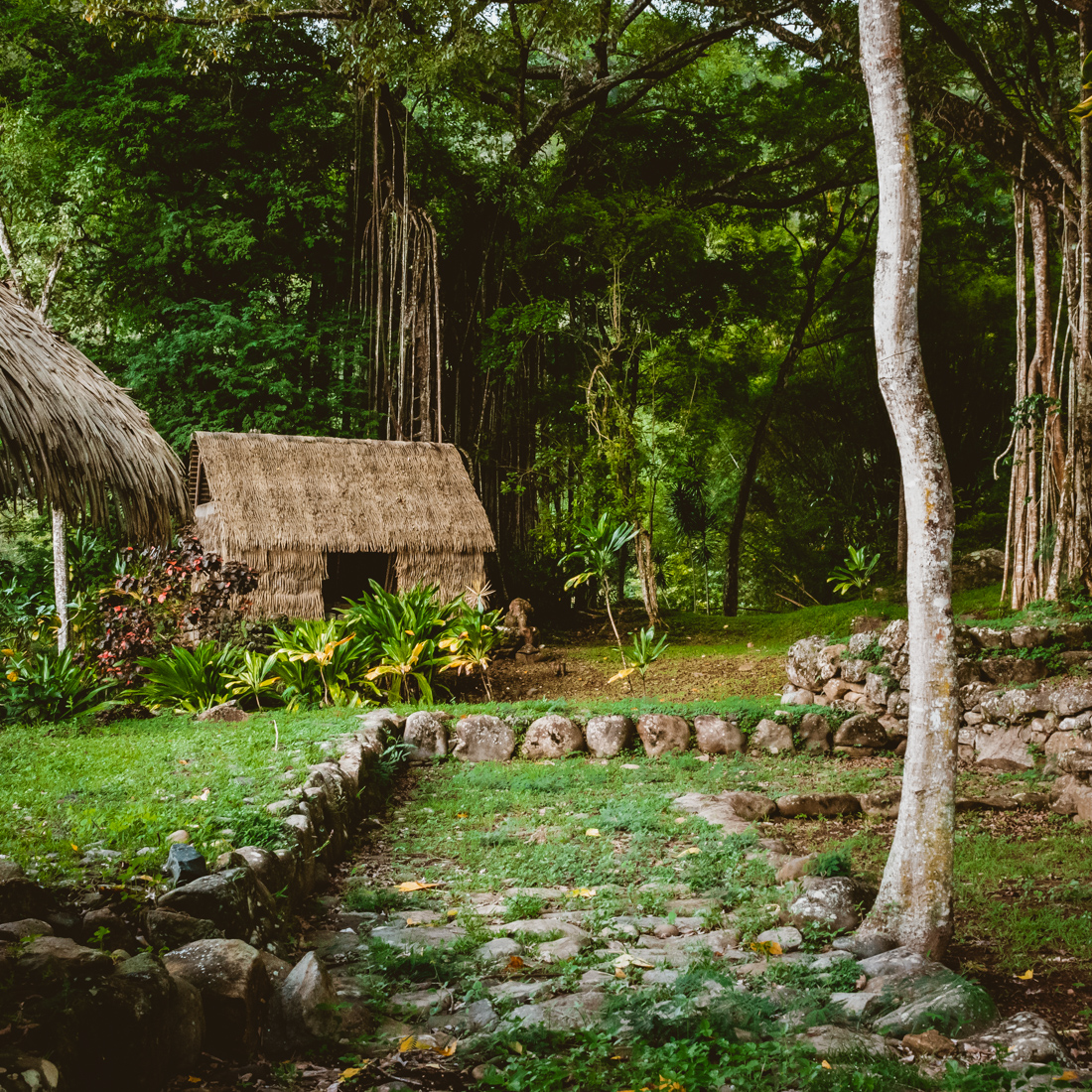 It’s a beautiful preservation/restoration and would have been a site worth visiting with a paid local guide.  Typically, we’re all about the self-discovery adventures but after reading up on cannibalism and Polynesian rituals I would love to hear the local lore of what all went on here.  Just reading the Human Cannibalism page on Wikipedia, sends the mind reeling with possibilities.

AWESOME tunes for vids: http://bit.ly/artlist-gwtw Artists Used In This Video:  Giants and Pilgrims / Russo and Weinberg

Sharing our lives and what we learn along the way is possible because of viewers like you.  If you enjoyed this video, post or perhaps learned something new, check out our Say Thanks page. There are lots of ways you can help keep these videos flowing. Best part is, most won’t cost you a penny but they make a BIG difference to us. So, Thank You! 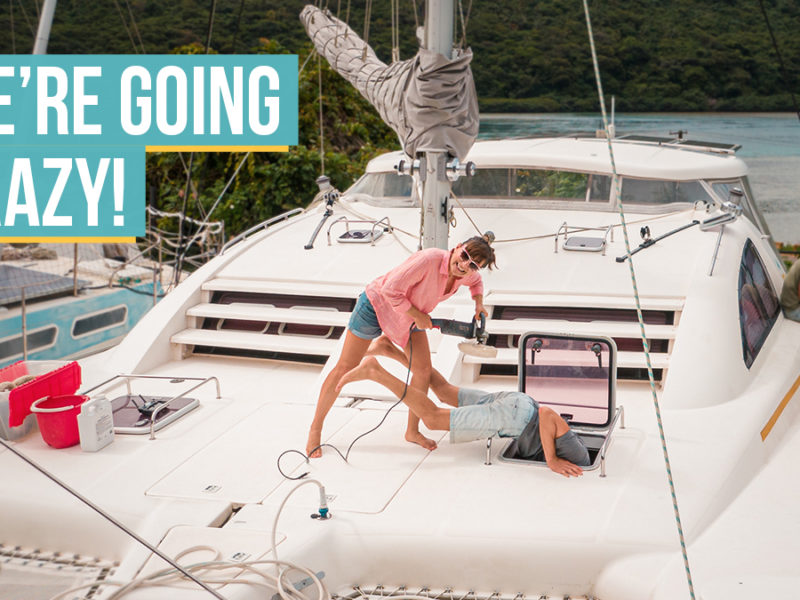 BOAT LIFE IS DRIVING US CRAZY!