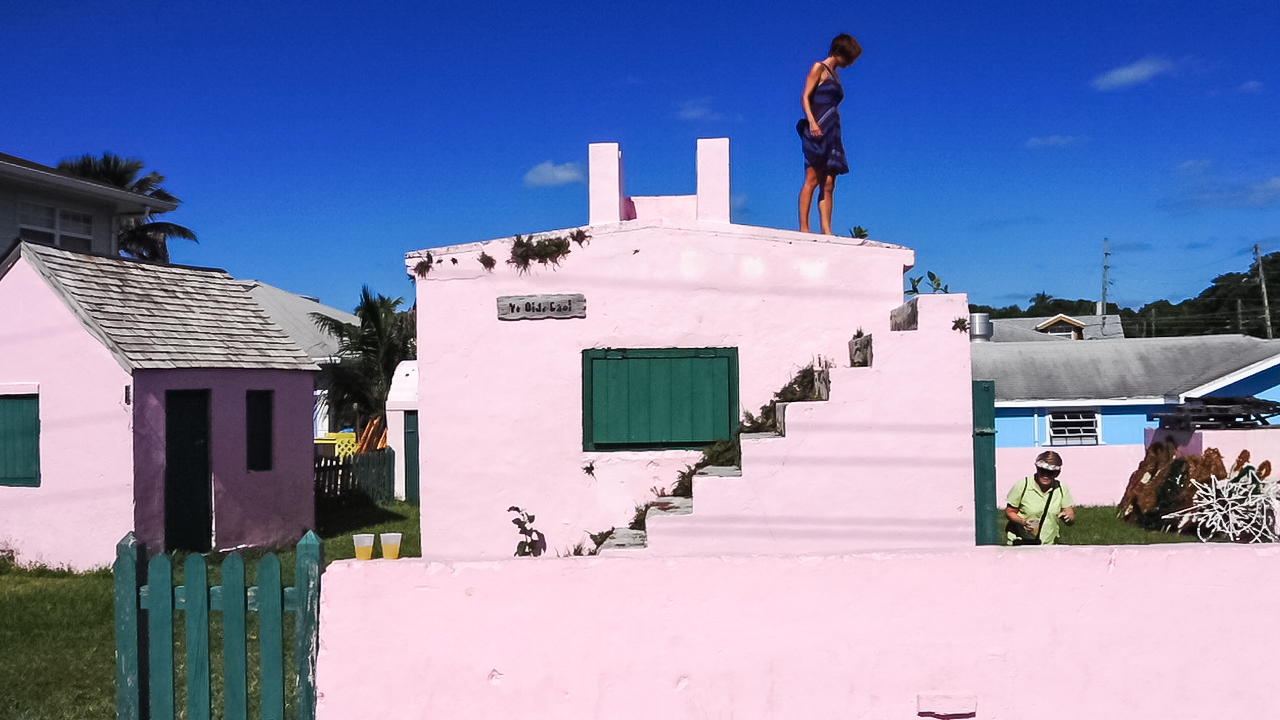 At our little cruiser sundowner party Nancy and Gee decided we must visit Green Turtle Cay before heading off.  It worked out perfectly since they needed more rum and we needed to upload a video.

Gee offered to be the chauffeur because he has the fastest boat (small boat with a big motor) and because we thought his boat was way cool.  It’s a 22’ C-Dory boat, which is essentially the camper van of the sea. We couldn’t get over how much it reminded us of our old Westfalia VW Vanagon. 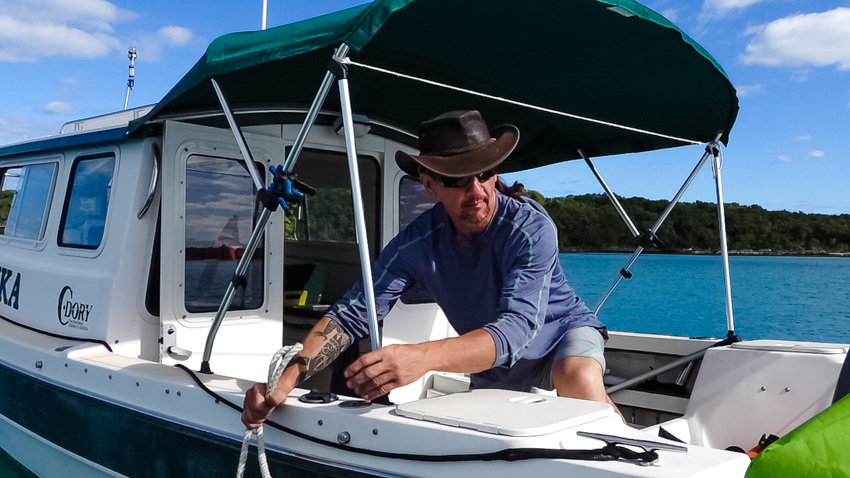 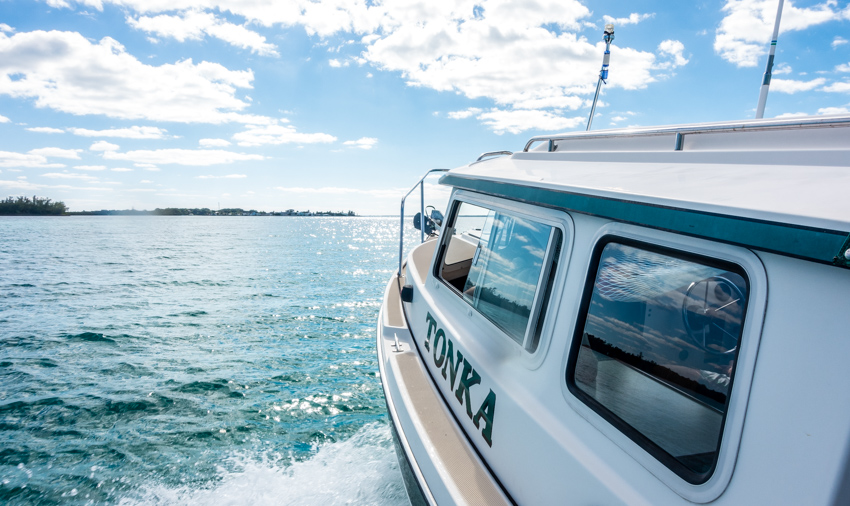 Nancy has spent a ton of time on Green Turtle (she is building a house on Munjack) and it’s easy to see she enjoys playing the role of tour guide.

Green turtle is only a whopping four nautical mile trip from Munjack Cay, which is why this cruising community can easily spend so much time at this anchorage.  Civilization is just around the corner, there’s a full-service marina with fuel and the island is incredibly cruiser friendly. We bummed around the town of New Plymouth. It’s a little town on Green Turtle Cay in the “out islands” of the Abacos, Bahamas.

We land on the free public dock, drop our garbage into the giant dock dumpster and we’re off to explore.  This is the most polished place we’ve seen in the Abacos so far. Golf carts are everywhere and judging by the colorful storefronts it’s a tourist friendly place. 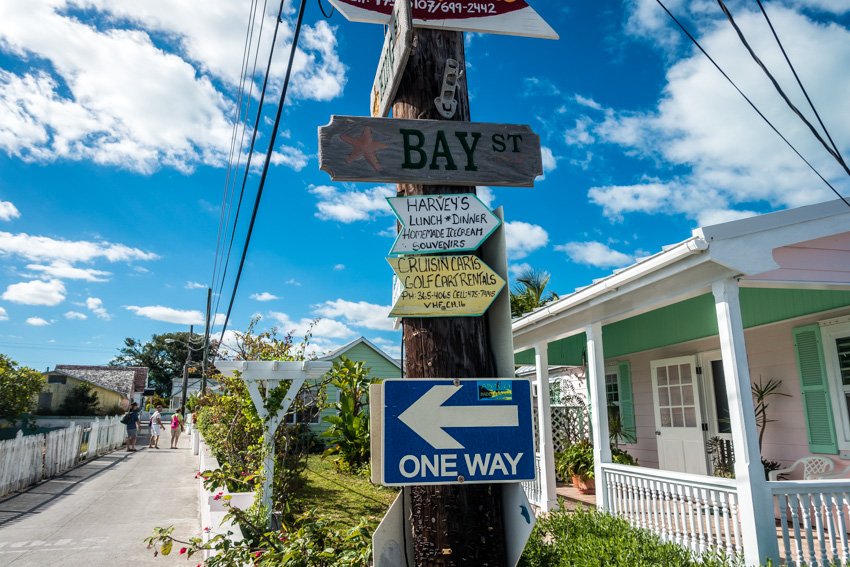 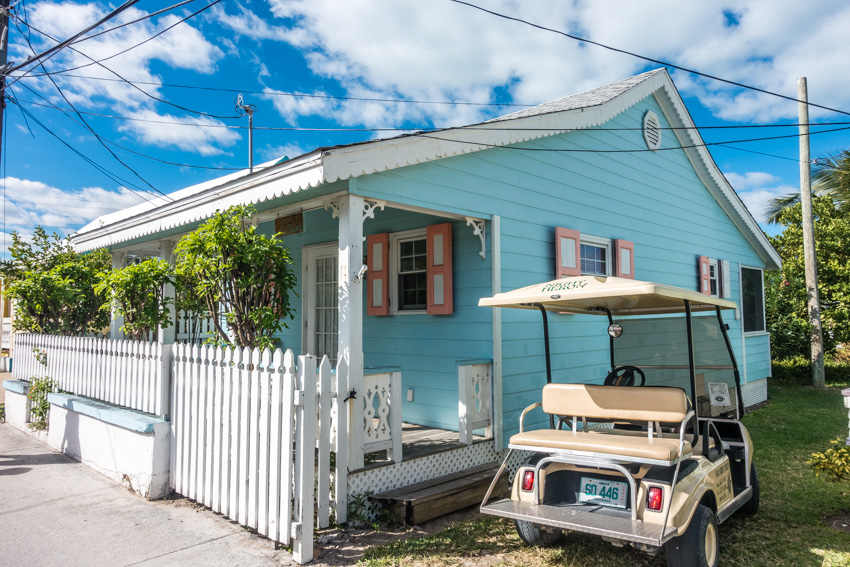 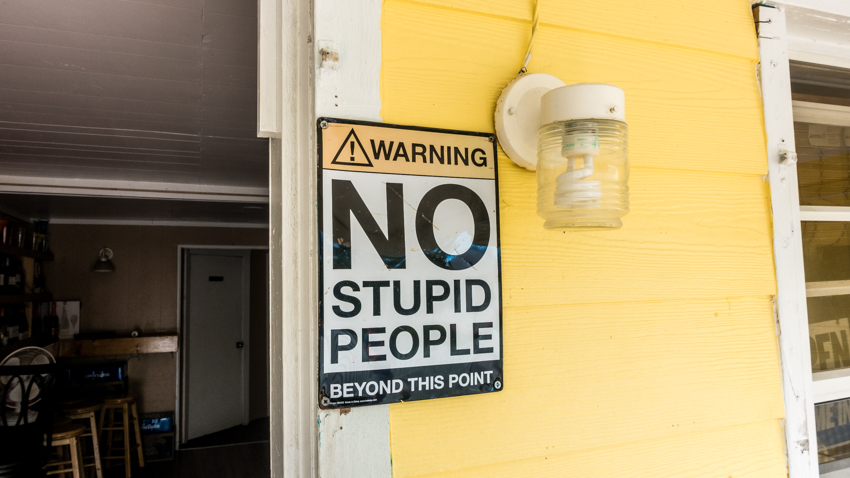 Our first stop is what Nancy calls Beer & Breakfast. It’s basically a diner, bar and liquor store. Sadly, we’d already eaten but the bartender/waitress was kind enough to give us the Wi-Fi password and let us store our computer behind the bar to get our upload started while we roamed about town. Of course, we made sure to buy some rum from them when we came back to retrieve the computer. 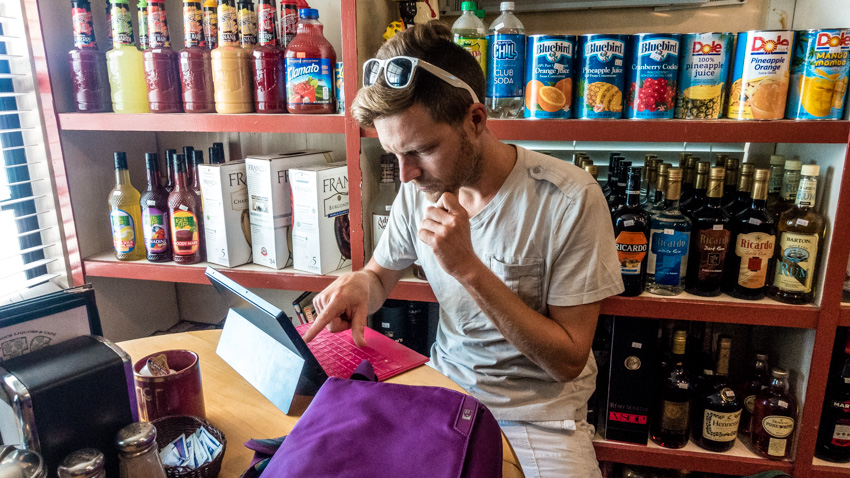 We went from one bar directly to another, but this time it’s with the intention to have a drink at the “World famous Miss Emily’s Blue Bee Bar“. The story is miss Emily invented the now famous Goombay Smash. It’s so popular in the Bahamas that Coca-Cola bottles a non-alcoholic version that we see in every store.  Her Goombay Smash is wildly strong, but tastes like punch we drank as kids with an insatiable sweet tooth.  To be honest we were disappointed that the sweet concoction was pre-mixed and served out of a plastic milk jug, it made the experience seem more like a tourist trap than a locally crafted cocktail. 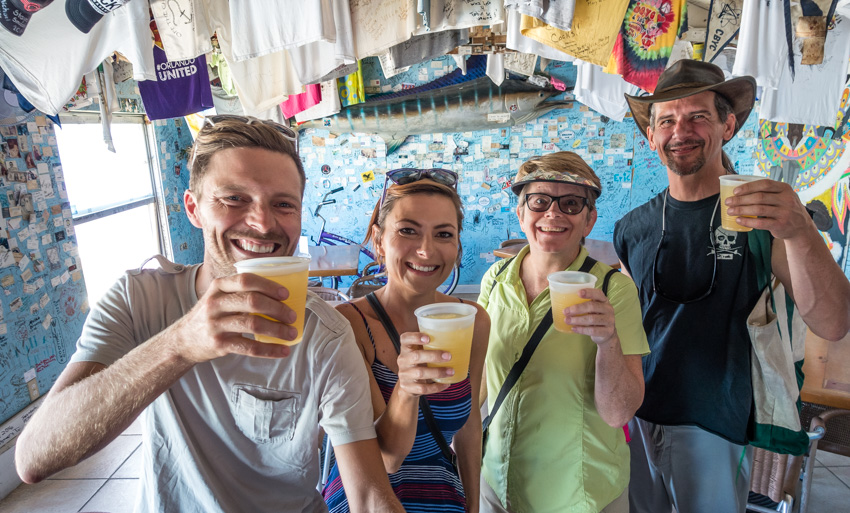 We continued the tour around the island with the Jail, the town offices and into a local eatery.  The food was good but nothing to write home about.  Each place we’ve eaten so far in the Bahamas has similar offerings of fried seafood, but this place obviously caters to tourists with burgers, pizza and chicken fingers.  One thing that’s a bummer is their menu states homemade fries, but that’s not what was served. The lady said they don’t always buy potatoes so today you get the frozen ones instead (I’m always a little bummed when I’m sold fresh then served pre-packaged foods, yet charged the same price).

We stopped into both grocery stores and here’s the consensus: It’s expensive, about double the price we pay in the states.  Fresh anything is hard to find as there are very few fruits or veggies since food takes a while to get here (it ships on a boat from Florida to Nassau to Marsh Harbour to Green Turtle).  We saw a $9 bag of tortilla chips which made us glad we provisioned well for the sinful snacky stuff.

Winter is the off-season here but we still ran across several business owners and people out and about running errands.  We were surprised that most of the people we met were white.  Turns out the settlers here are British loyalists, many coming from the Carolinas in the late 1700’s. One thought I couldn’t shake during our visit: This town feels like a popular destination for the retirement crowd, almost like one of those active adult resort villages in Arizona.  But, that could be due to the time of year we’re visiting.

New Plymouth on Green Turtle Cay is a cute town and we felt our one day tour was enough to satisfy our curiosity here.  If we make it back through this area we may stop for another walk-about, especially considering it’s the only town we’ve seen since Grand Cay. 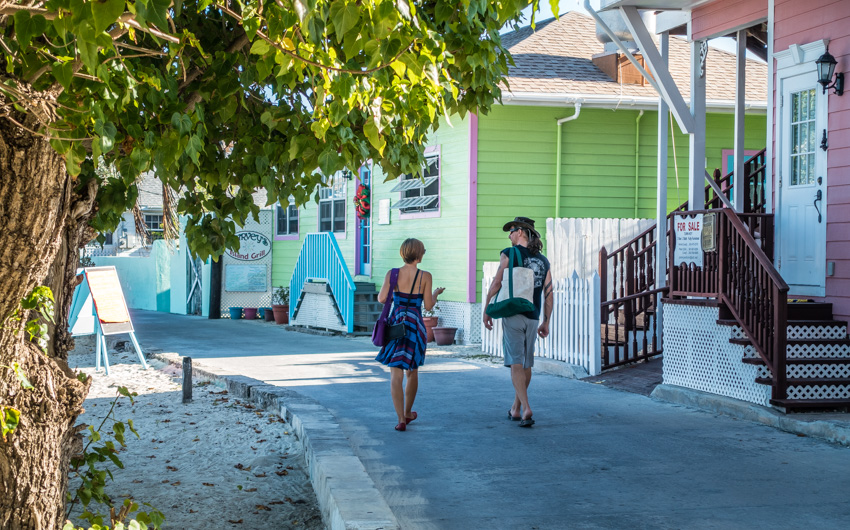 As you may have noticed we departed this anchorage just before thanksgiving, and that was a difficult decision to make. You see, we set out to explore as much of the Abacos before we have to turn around to pick up family for Christmas and New Year’s…which means it’s time to sail on.

Nautical Miles Motored: 8 miles round trip from Munjack Cay to Green Turtle Cay
Dates: November 21, 2016
Anchorage: There are anchorages at Green Turtle but we were staying at Munjack Cay
Cell & WiFi: Our BTC signal was good here but we were trying to conserve our data by using local wifi.  The local wifi speeds were slow and BTC 4g is much faster if you really need fast internet.