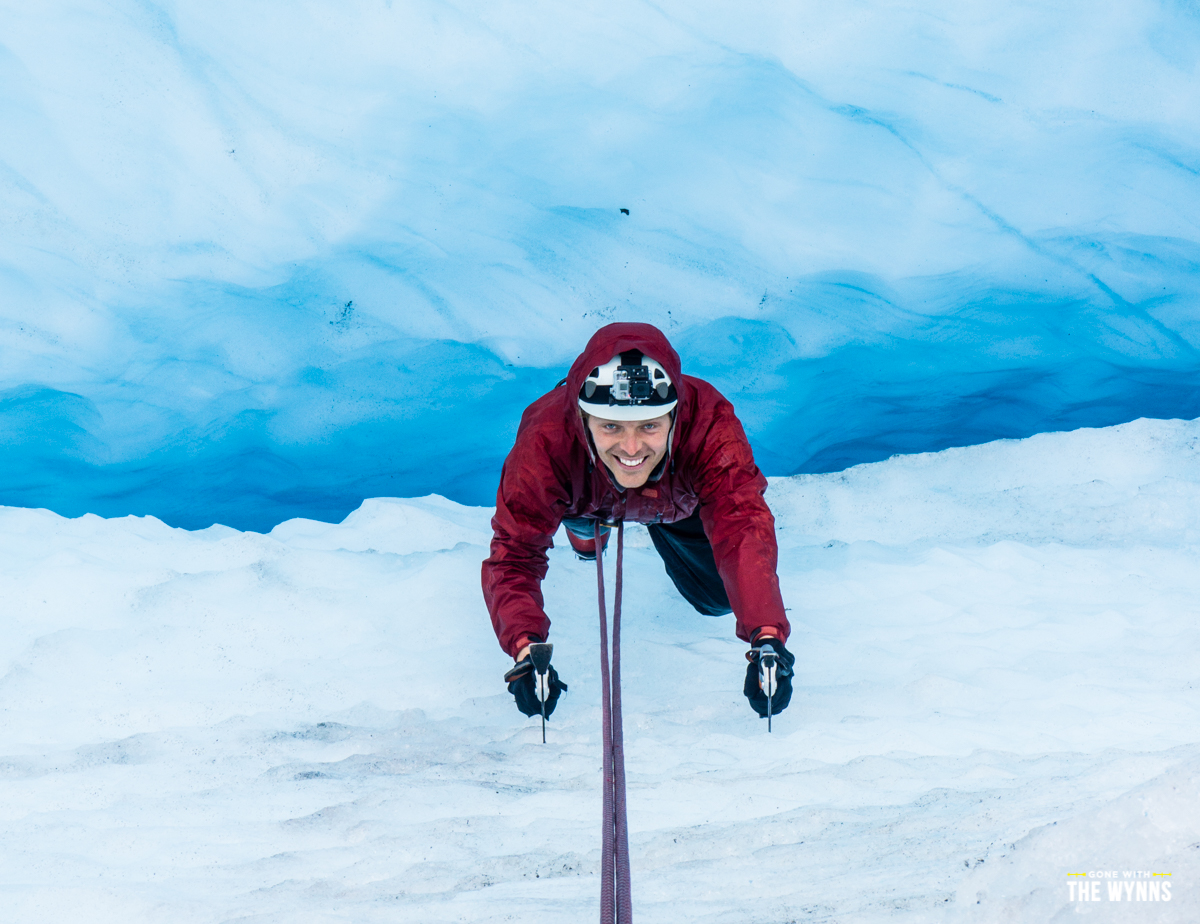 Ice climbing. Descending down into the belly of a glacier and becoming a part of a world we so rarely have the chance to see. This is big! It’s a bucket list adventure and one I have to do again but, not entirely for the obvious reasons.

I was ready for this. We just hiked our first glacier a couple of weeks ago and I’ve mentally prepared myself knowing I wanted to memorize every element, allowing myself to be consumed by the experience. With our cameras rolling and our game faces on we headed out to Kenai Fjords National Park.

Exit Glacier is in the Kenai Mountains of Alaska, one of Kenai Fjords National Park’s major attractions and one of the most accessible valley glaciers in Alaska. All glaciers are a visible indicator of climate change but Exit Glacier is one that is heavily monitored by park scientists and has retreated approximately 187 feet from 2013 to 2014.  There’s no denying our planet is changing and if you want to see and experience these glaciers for yourself my advice would be: Don’t wait too long. 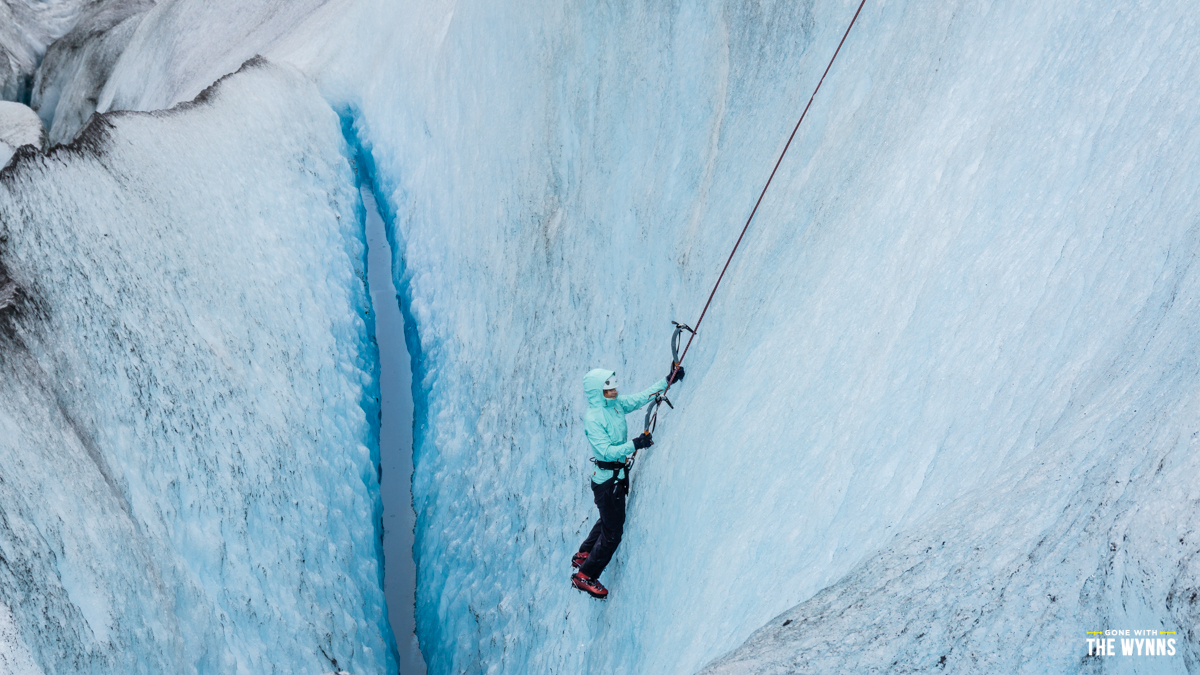 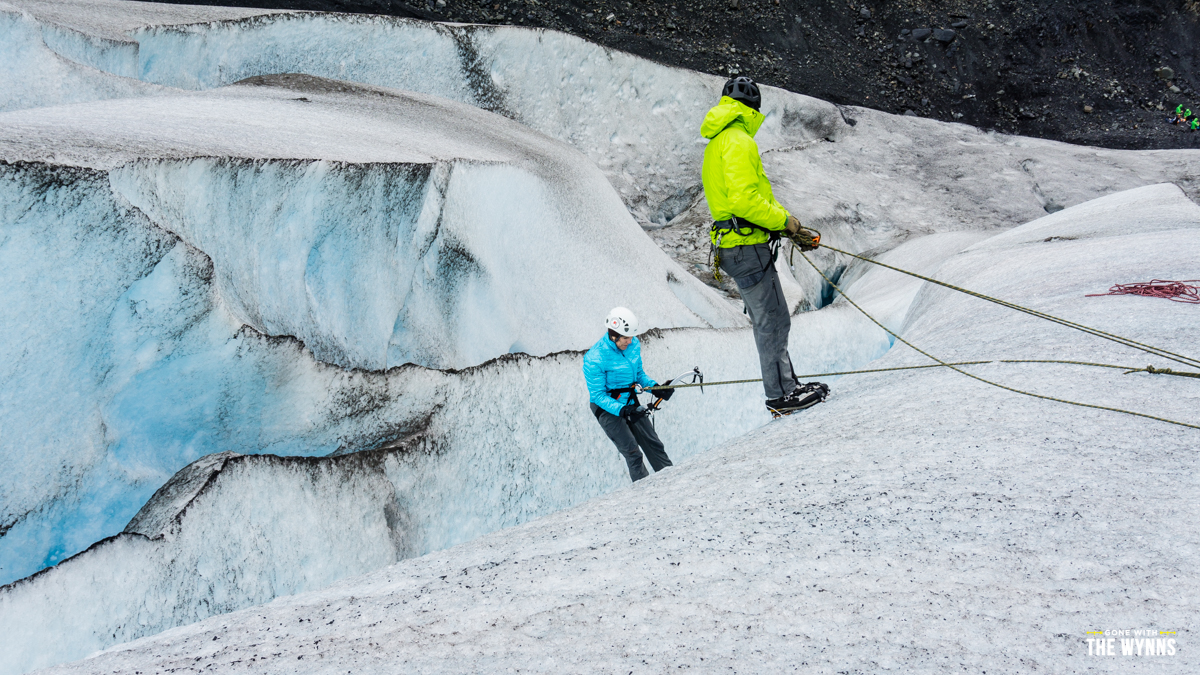 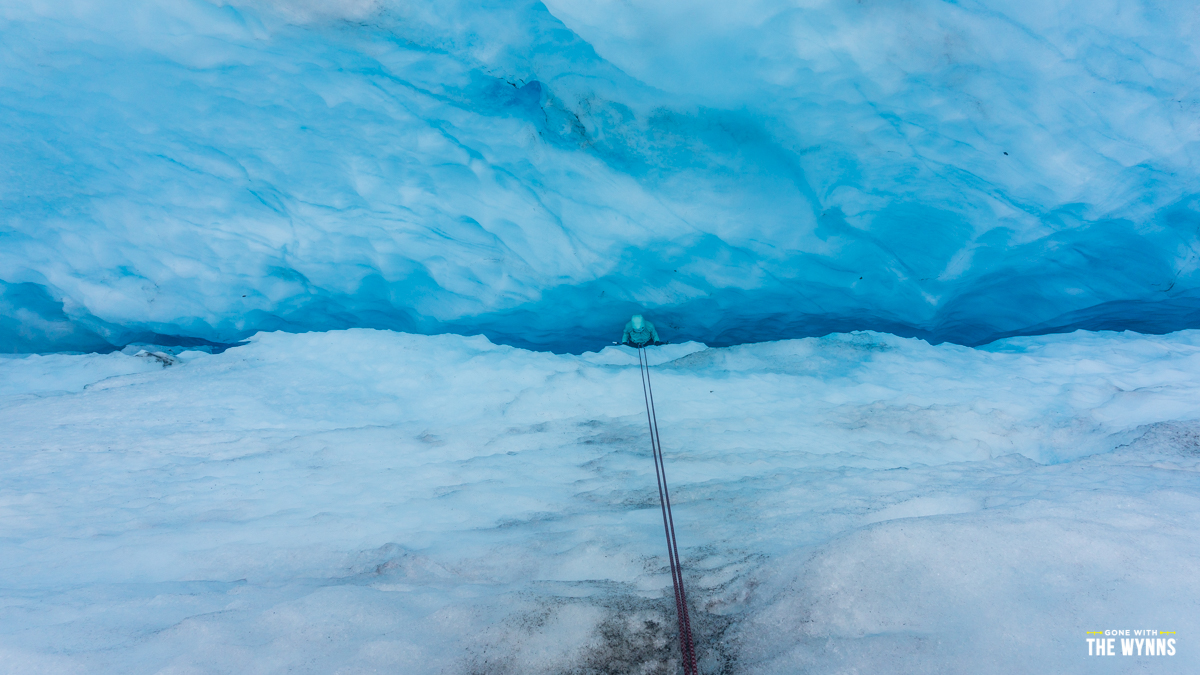 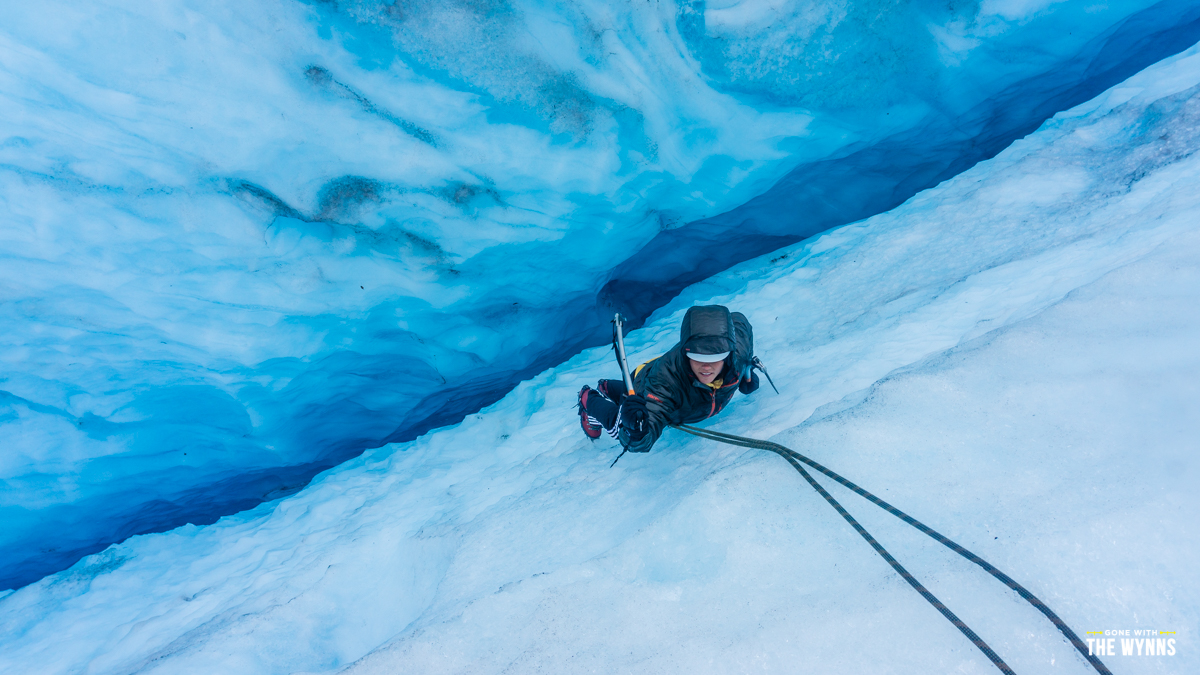 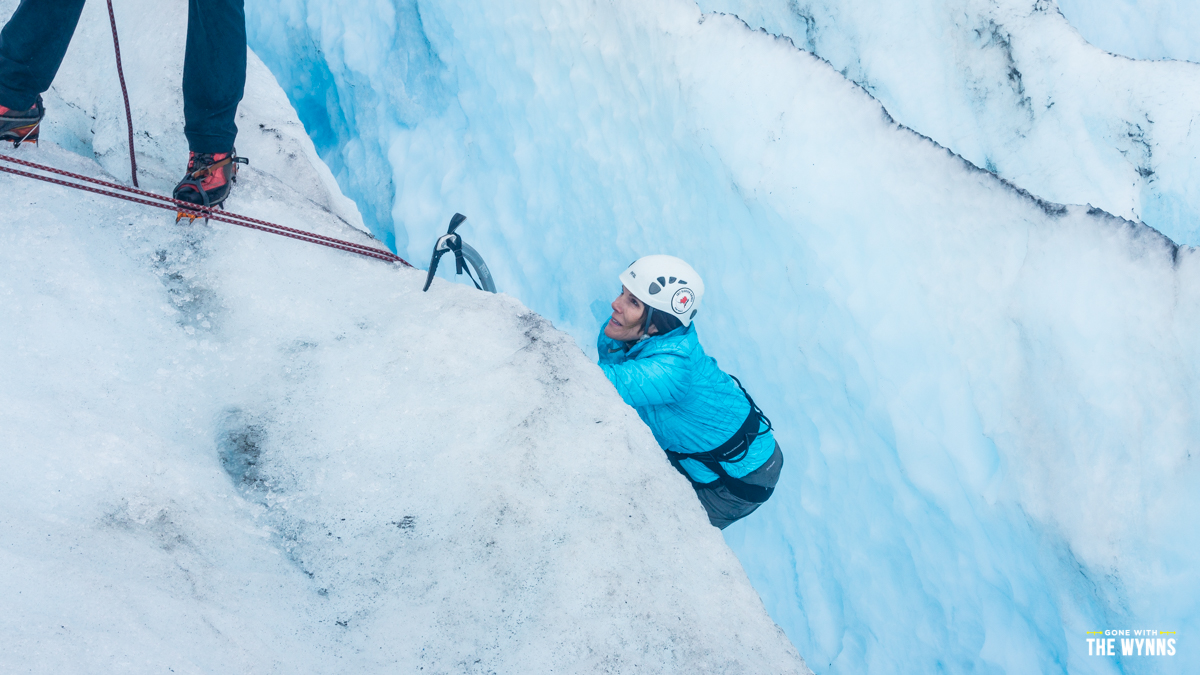 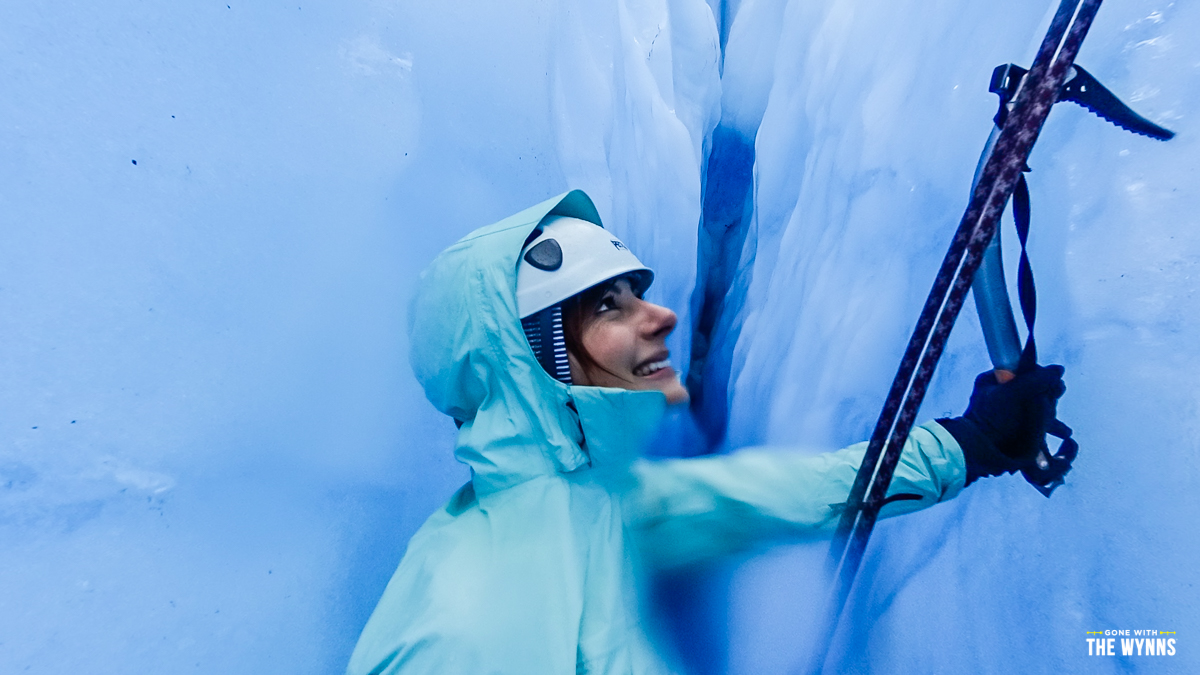 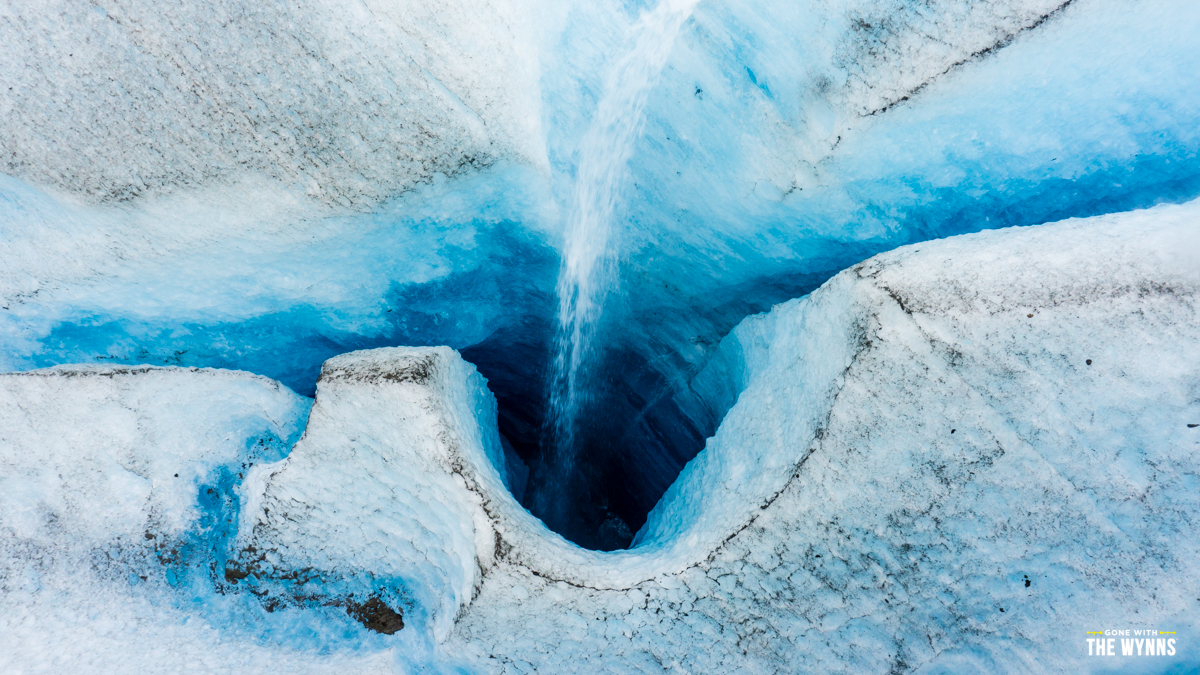 As far as we could tell, there were two different outfitters in in Seward offering the Ice Climbing adventure on Exit Glacier. We read some reviews, tossed a proverbial coin and booked with Exit Glacier Guides.  It’s not a cheap adventure at $185 per person but I can honestly say for an all day excursion (about 8 hours), with two fantastic guides, the whole trip was priceless! 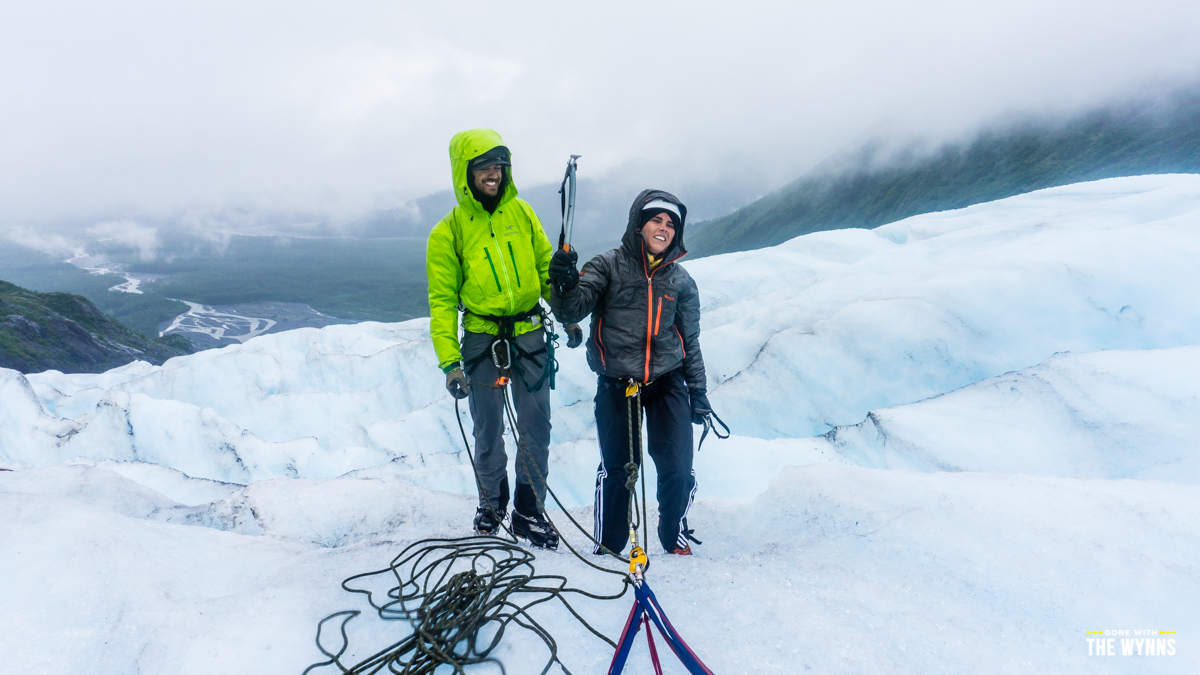 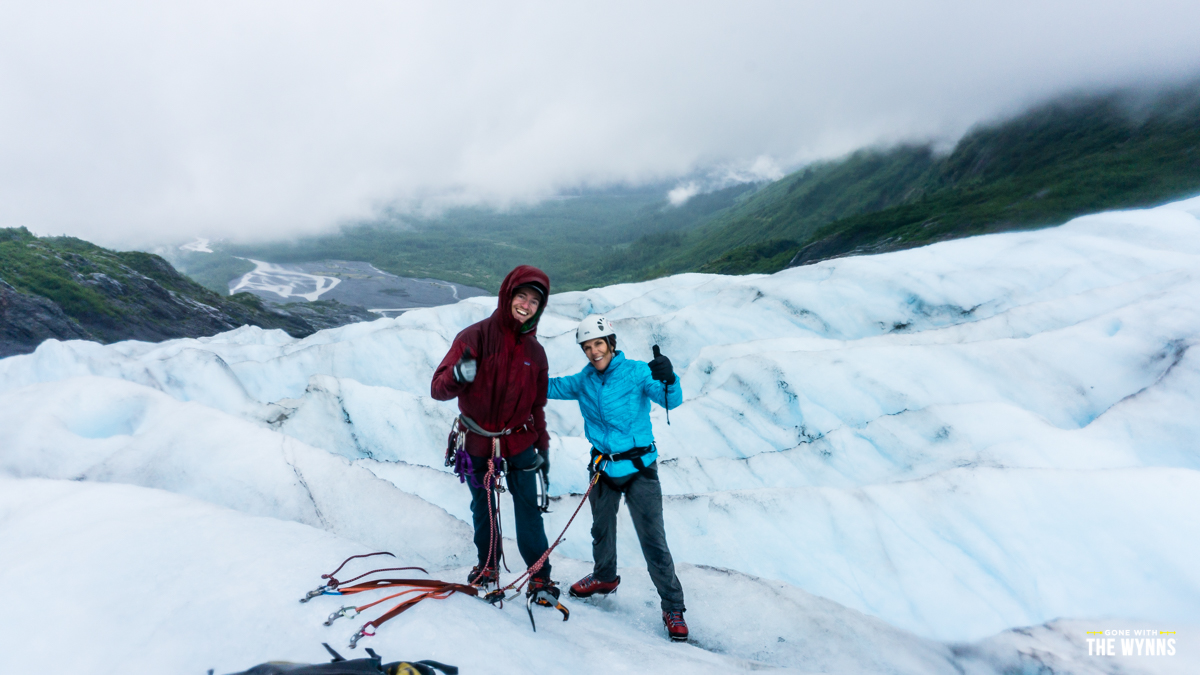 Luckily, our guides are beer snobs and they had a keg back at headquarters that was filled with a tasty local beer…so we got that much need post adventure brew, and best of all it was on the house!!! 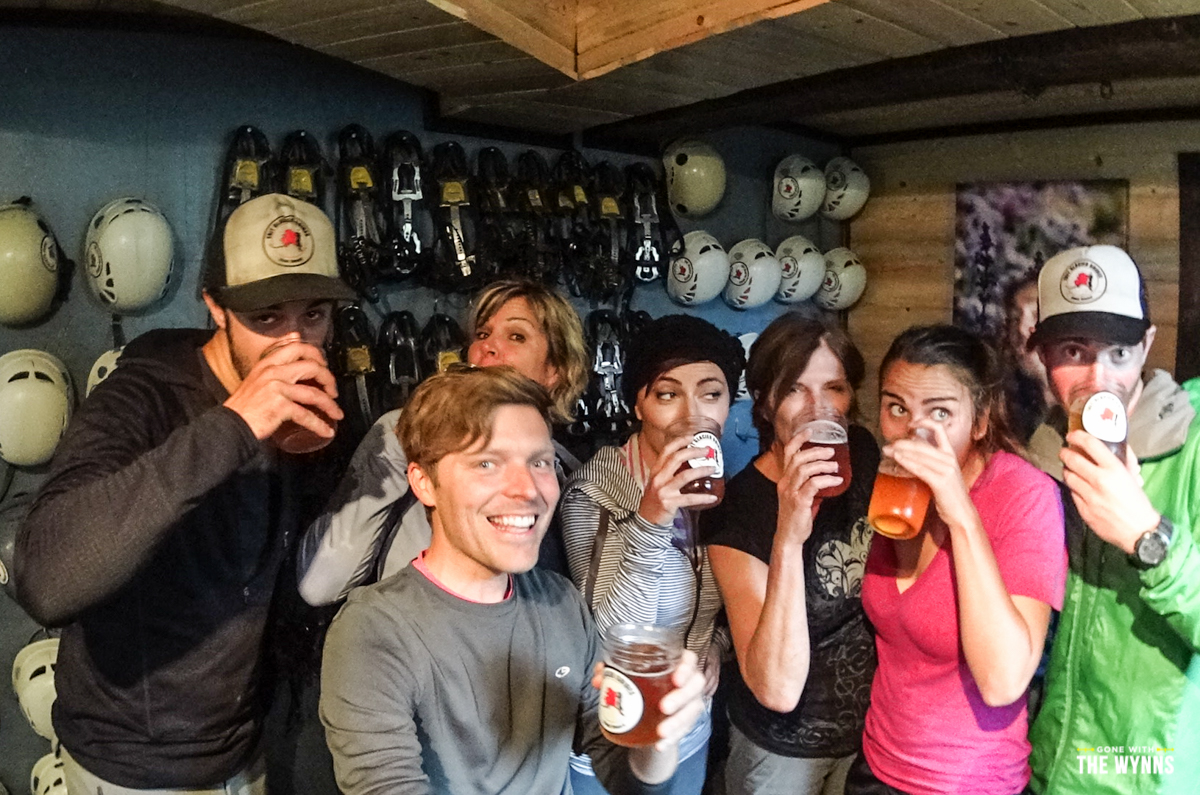 You don’t need any experience or climbing gear.  But being physically fit to some extent is important. We hiked around 5 miles with elevation gain plus swinging those axes and digging those toes into the ice is tiring work.

You’ll want to have light clothes on for the hike up and good hiking boots (it is a warm, humid rain forest). Once you’re on the glacier it will be time to layer up, put on your best rain gear and waterproof gloves (we didn’t have proper gloves and we were very sad about it).

See all of our favorite gear in our store under the Adventure & Hiking section.

You can bring a nice point and shoot or a smaller DSLR camera in a dry bag inside your backpack but if you want any shots down in the glacier you will want a solid waterproof camera on a “selfie stick” or “extendable monopod”.  We own and used both the go pro and a sony action cam for this trip.  I personally like the action cam better than the go pro.

See all of our camera gear in our store under the Cameras & Computers section.

Poor Jason did not take it well when he realized the footage was lost and never coming back. It was if he were a kid that had spent his entire year’s allowance on a new bike only to have it stolen the moment he got it home. Here is his cautionary tale about how he lost all the best video footage from this day:

How I Lost the Ice Climbing Video Footage

I like to learn from other’s mistakes so when I make a big mistake I like to share it so everyone else can benefit from my mishap.  If you watched the video above you’ll know that I lost the best footage from our Ice Climbing adventure, fortunately we were filming with two other cameras so the entire thing wasn’t a wash.

I asked myself the same thing.  I scoured all the folders to see if I misfiled the video from that camera, but alas I couldn’t find any of the video footage from that day.  Here’s what I think happened:

When we came home, exhausted from the trip I download the files and placed them into my Seward file. I immediately put the photographs onto Nikki’s backup drive so she could post socially about the day’s adventure.  I didn’t backup the video files, I just left them on my computer’s internal hard drive.  I formatted the card as normal.  The next day we filmed a ton of footage again nearly filling up my card.

This is where it gets tricky. The file numbering on AVCHD Videos in the Sony a6000 always resets when I format the card.  So when I tried to add new videos from our next adventure into the Seward file, Windows asked me “replace or rename” and I must have selected replace.  It’s a combination of the duplicate file numbering from the Sony Camera (which is my only complaint with the a6000) and user error…and just like that, with one simple click all the files from the Ice Climbing day are replaced with our day 2 fishing adventure!

The extra distraction of having family around didn’t help either, instead of focusing on the most important part of filming (downloading and backing up the cards) I was concerned about hanging with family and going for that post ice climb brew.

I accept 100% of blame, it’s hard to say and it absolutely kills me that we lost that footage forever, but it happens and I can’t beat myself up over it.  We are all human and we all make mistakes.

Can’t the files be recovered?

If I would have realized my error the next morning or within a day or so, it is possible some of the files would still be recoverable. Due to the fact we are editing months after filming, the footage is 100% gone!  That SD card has been filled, downloaded and formatted a hundred times since we captured the original video in Seward.  Wish I could recover the files but those 1’s and 0’s are long by now.

What did I learn?

When filming every day for such an extended period of time it’s nearly inevitable there will be a mistake made. In the future I will create a new folder for each day so there will be no question if that day’s footage has been downloaded and backed up properly.

Have you ever gone Ice Climbing or walked on a glacier? Maybe you can sympathize with Jason and his tragic mishap? Share your thoughts, opinions and condolences in the comments below…trust me, I can’t wait to read them.

Fuel Prices – Fuel was about .20 cents more per gallon in Seward than in Anchorage, so fill up before you head down.

Road Conditions – The Seward Highway is well maintained and was in great shape. However, traffic on Sundays can get a little crazy with the locals coming and going.  Travel during the week was light and pleasant.

Weather – Highs in the mid 70’s with lows in the mid 40’s.  We had a mix of sunny and rainy days during our visit.

See all our Alaska Travels and Tips here: #AlaskaBound 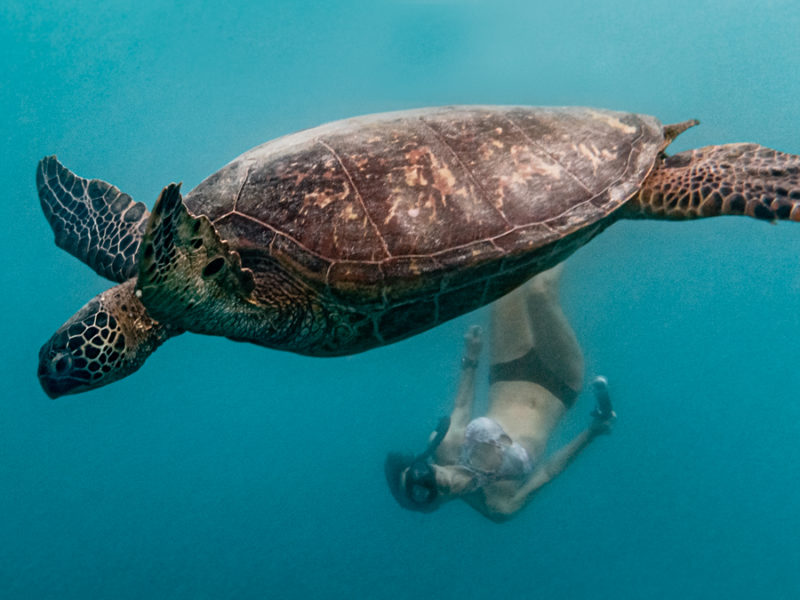 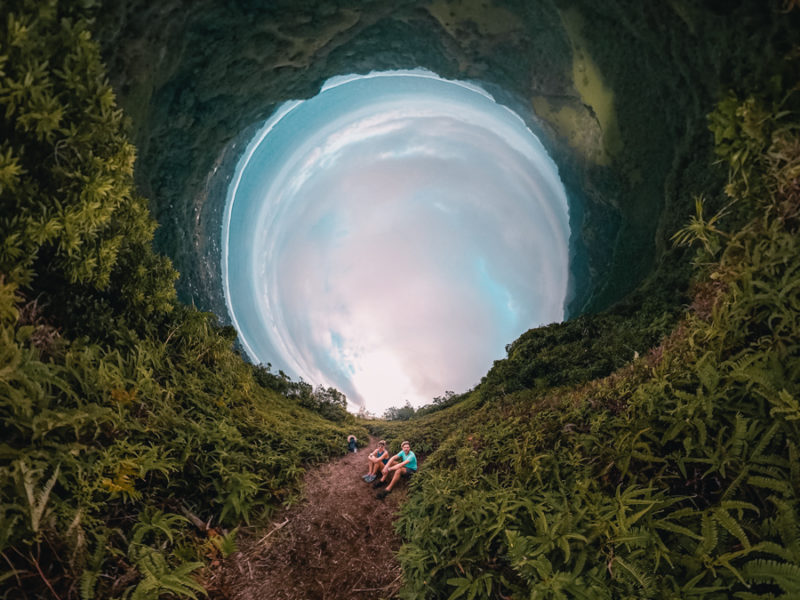 Down The Rabbit Hole – Exploring Rarotonga