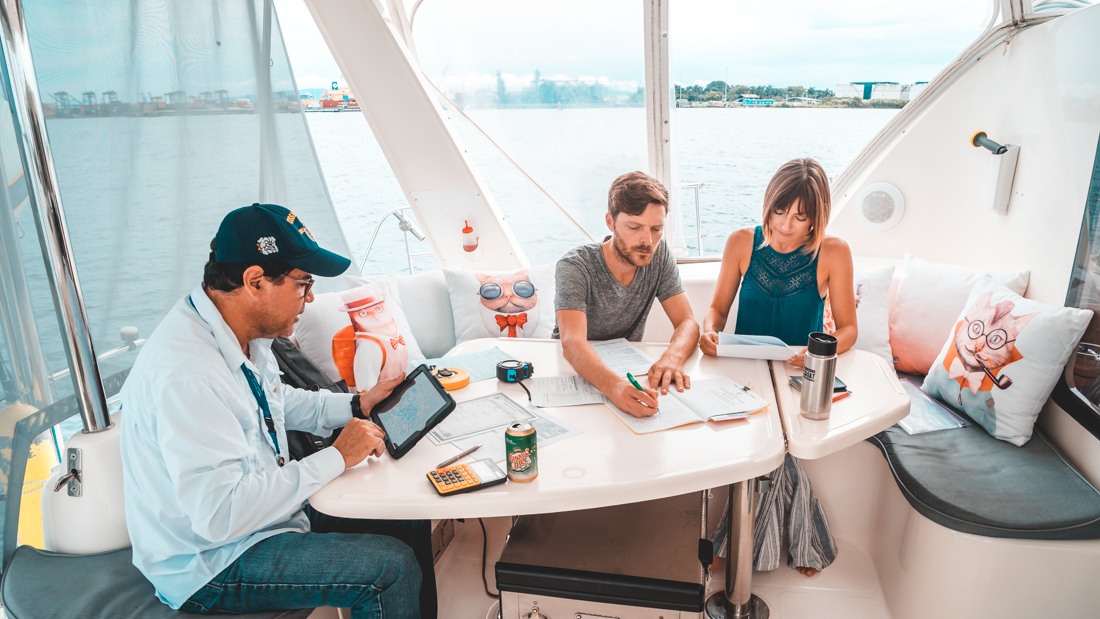 No Agent? No Problem! Transit The Panama Canal

Every sailor wanting to go from the Atlantic Ocean to the Pacific (or vice versa) has two options. Take on Cape Horn or transit the Panama Canal (well, technically you can ship your boat but that’s not sailing).

Now, before we go diving into these two options its important to remind ourselves where we are as sailors.

We’ve been sailing for less than two years and only since arriving in Panama have we earned our first swallow. (Sailors earn a swallow tattoo for every 5,000 nautical miles traveled. The circumference of the earth is 21,639 nautical miles. That’s about 4 swallow.)

Ok, back to those two options…

Rounding Cape Horn is to sailing what Mount Everest is to hiking. It’s not for newbies. The westerly winds are aptly named the “furious fifties”. It’s known for being a sailor’s graveyard because of the strong winds, currents, big waves and icebergs. We’re not ready to dodge icebergs yet.

The Canal was built across Panama to save ships from having to go all the way around Cape Horn. But, it’s more than a nautical shortcut from one ocean to another. It’s a historic man made engineering marvel. Ships travel up 85 feet above sea level through a series of massive, seven foot thick lock doors. Over 15,000 ships make the crossing between the Atlantic and Pacific Oceans each year. But, only a small percentage of those are small, non-commercial vessels like ours. While transiting the canal is no Cape Horn, it’s still a big deal.

Making the decision to transit the canal was the easy part. Actually transiting the canal requires planning, preparation, extra crew and a fair amount of cash.  The expenses to transit the canal add up quick, which is exactly why we wanted to forgo using an agent. Turns out having no agent is no problem. Money saved, experience gained and knowledge shared!

With our line handlers on board, we’re in full geeky excitement mode.  Transiting the Panama Canal is a major milestone for any cruiser. But, we’re about to change oceans among massive cargo ships, good friends and family.  It doesn’t get any sweeter than this! 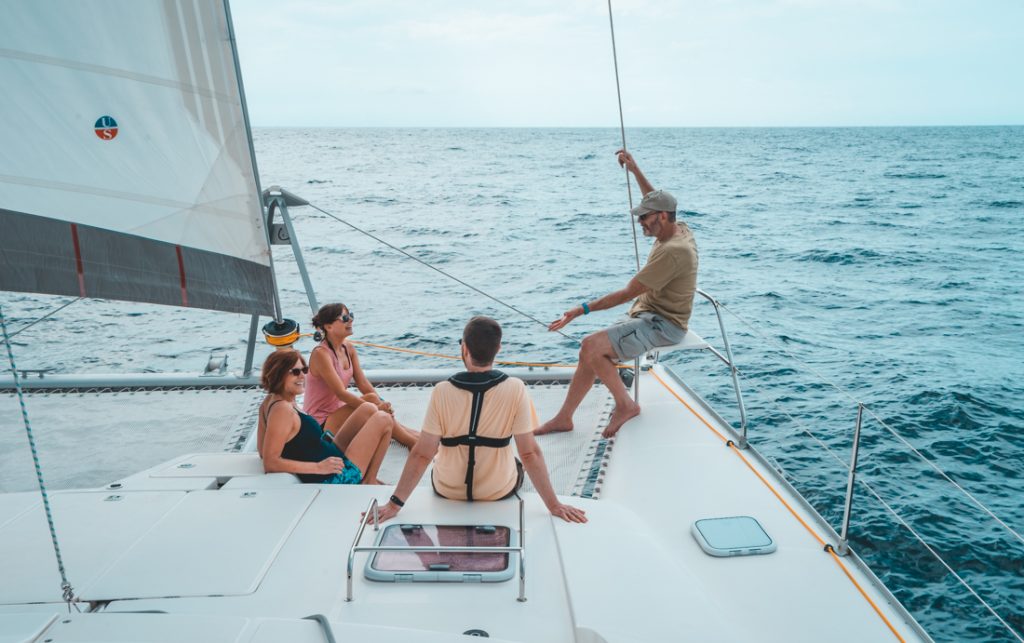 About Our Linehandlers – Meet The Crew

A big thanks to Jason’s Mom (Mary), Peter and John (AKA The RV Geeks) for making the trek out to join us.  If you are an RV’er or even a DIY’er you probably already know about The RV Geeks.  If not, you’ll want to check out their website and YouTube channel:  The RV Geeks.  As for Jason’s Mom, she owns a mineral makeup company based out of Dallas called Mineralogie.  Having friends & family that can set their own schedules is a major bonus for last minute requests such as “Hey, we’re going through the canal in 10 days…wanna come?” 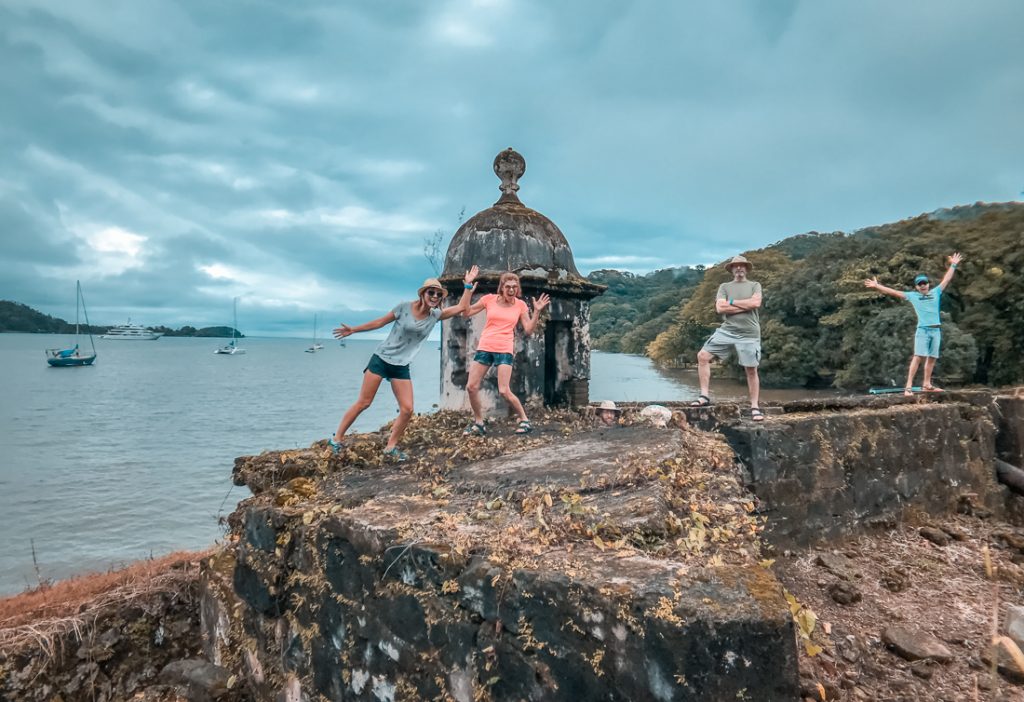 Help Please and Thank You

Before I dive into all the gritty details, I need to ask for your help. We spend an insane amount of time, filming, documenting and creating what you see. Maybe this post will save you $$$ if it gives you the confidence to transit the canal without an agent. If you like our videos and articles, you can help keep the creativity flowing. We’ve listed out all the little (like sharing) and big (join the crew) ways you can help here: gonewiththewynns.com/tip-jar
Best part is, most won’t take more than a few seconds of time or cost you a penny. Thank you for being a part of the journey!

The peak season for yachts transiting the canal is January to March.  Around three to nine small boats a day go through.  Our admeasurer’s advice: Avoid peak season if you can for more undivided attention and less stress.  We decided to transit in November.  We literally could have sailed in, got measured and transited the next day.

Anchoring vs Marina During Prep For The Transit

The most popular spot seems to be Shelter Bay Marina. Focusing on the transit yacht business, they are the only marina in the area and know the biz, so prices are not cheap. And, everything is a 30-45 minute taxi or bus ride away (at least until the bridge is complete). That said, we’ve heard great things about the owners and no negative feedback.

We prefer being at anchor and the canal has the designated “flats” anchorage that is free.  We stayed there for measuring and the night before our transit. We felt totally safe and there was very little traffic at night.  Other than the occasional pilot boat wake it’s a calm anchorage.  After our canal measurements and prep was complete we sailed back to Linton Bay Anchorage.

If you have boat work to be done before the transit, Linton Bay Marina is only a day sail away, it has a lift and far cheaper slips.

Boaters insurance is interesting (AKA expensive and complicated). We buy coverage for the areas we plan to travel and read the fine print carefully. As we enter a new country or body of water, we must buy coverage for that area. Insurance prices vary like crazy from boat to boat, sailor to sailor, and of course providers. But, for what it’s worth, we paid an extra $316 to cover us through the canal and add coastal pacific cruising. We will have to re-up again when make the Pacific crossing to French Polynesia.

Want more info on sailboat insurance? Check out this video and post: gonewiththewynns.com/exhausting-journey-buying-cruising-sailboat

Maybe the extra $300-$600 for an agent to manage your transit is in your budget. Maybe you’re in a rush and feel you need the help.  Plenty of people we talked to like their agent and enjoyed having them. But in the end, they didn’t do any less prep than we did.

Why You Don’t Need An Agent

The employees of the Panama Canal Authority all speak excellent English.  They are professional, organized, helpful and kind.
Everything you need to know is outlined clearly in the transit documentation. Not sure about something? Call the phone numbers listed to ask questions. We were blown away by how quickly they answered the phone and how politely they answered all questions. It was all extremely efficient.

Here is the exact document “form 4352-1” with all the instructions and requirements that our admeasurer handed us: http://www.pancanal.com/common/maritime/forms/4352-ENG-201211.pdf

We read a ton of blog posts and cruising guides before making the decision on Panama Canal agents.  We also spoke to fellow cruisers who’d completed the transit with and without an agent.  It’s overwhelming how much fear mongering there is about the canal transit.  In the end you must go with your gut on what’s best for you.  From our experience, we can without a doubt say: Transiting the Panama Canal without and agent was easy and 100% “doable”.

Questions we were asked by the Admeasurer

Our Ad Measurer Informed Us

Costs To Transit The Panama Canal

Because our Catamaran is 43ft, we fall under the 50ft category.  While our total deposit amount paid to the bank was $1875, we did receive our buffer money back for a total of $984 to transit the canal.

We’re officially on the other side of the Panama Canal and we can honestly say…without a doubt…we made the right decision.  The Panama Canal Prep was easy and even fun.  We loved going through processes (especially because they run things so smoothly), documenting our experiences and sharing them with all of you.  We successfully transited the Panama Canal without an agent.  If we did it, you can too!

If you have any thoughts please share in the comments section below.  If you have a burning questions please ask!  Thanks to each and everyone of you for being a part of the adventure.