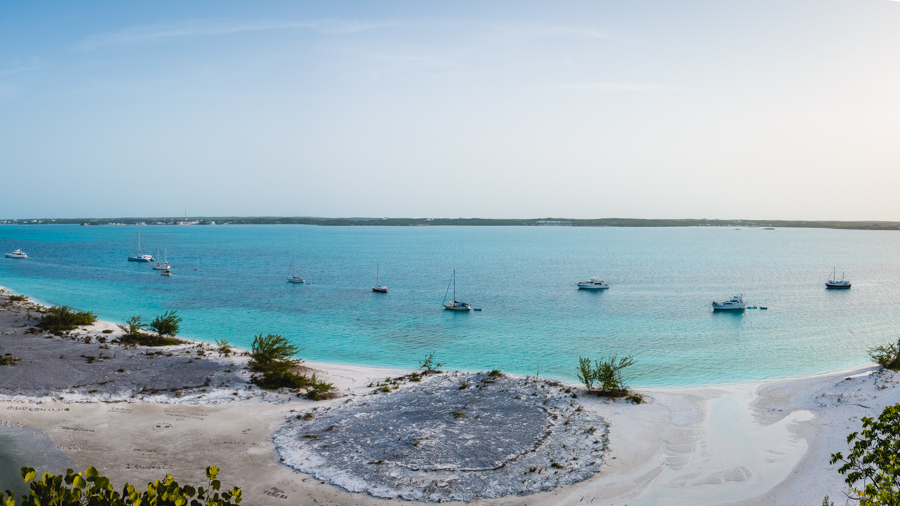 I have typed and deleted at least a dozen different paragraphs trying to sum up everything that was packed into these five days. Sailing, making of new friends, adventures and misadventures, snorkeling, spearing, and all-around living of life.  In one singular word, it’s cruising.

We’re on a voyage to sail from Florida to Panama but this slice of time is the heart of the journey.  It’s the sweet cream filled center, the middle part of the adventure where we’re all in the groove and getting our stride for the second half.

If there is one place in the Bahamas you are guaranteed to find friendly cruisers, it’s George Town.  I can’t say that it’s my favorite spot because that goes to Long Island or the Abaco’s but it’s certainly seems to be the hangout spot.

Last time we were here in George Town there were over 300 boats in the area.  That may not sound like a lot, but it makes for a very packed anchorage…and a lot of cruiser shenanigans (aka fun).

Now it’s the off season and I would guess there are around 50 boats hanging out.  Still a fair amount of fellow salts but wow, it made for a much less intimidating arrival.  Not to mention our options for a place to drop the hook was dramatically increased.

Turns out the crew of s/v LaMo was in the hood!  These guys run a blog called Chocolate and Marrow (a sailing food blog I recommend you check out) and I had been chatting with Brooke (the woman behind the blog) a bit over the past few months.  It was such a pleasant surprise to see them in George Town and go spearfishing together!  Now, if only we had remembered to get a photo of all of us and the crew of s/v LaMo.  Doh! 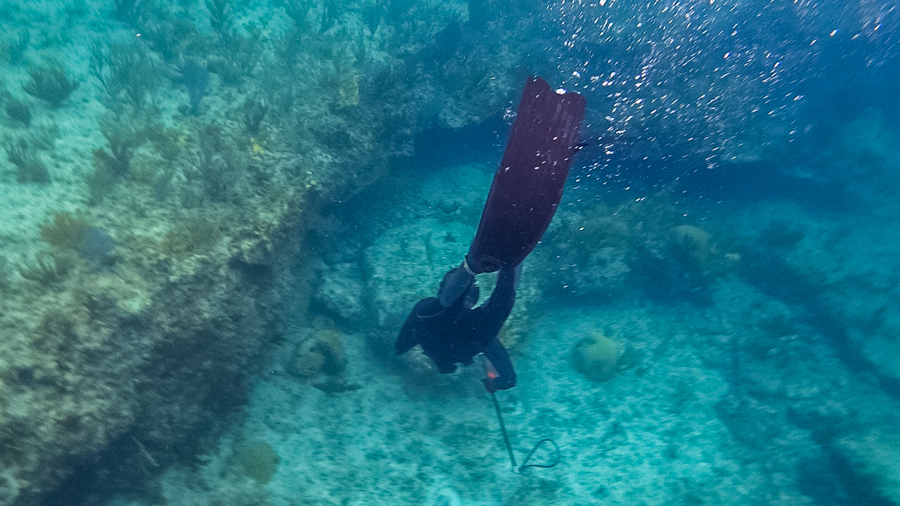 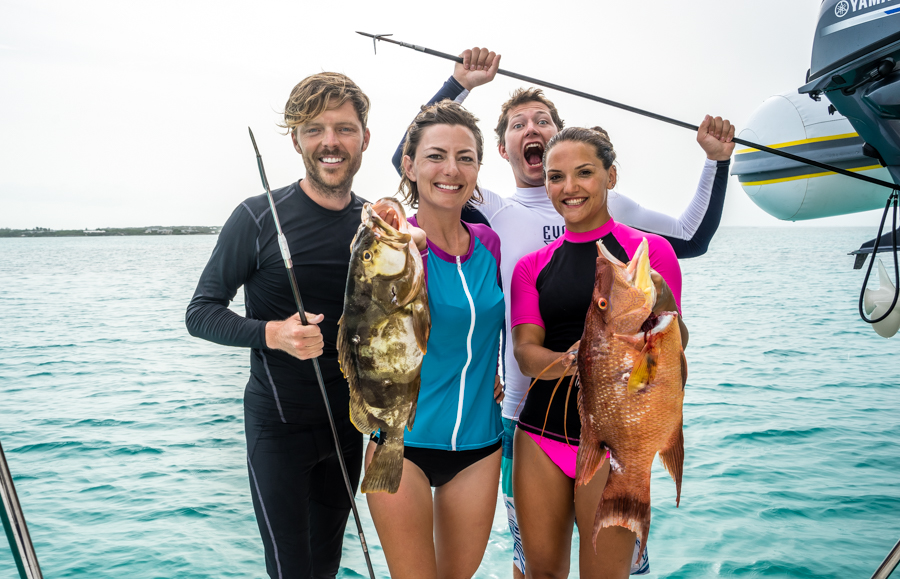 You may have noticed me point out my fire coral sting while we were spear fishing. Fire corals have a bright yellow-green and brown skeletal covering. It was my first encounter and wow, I fully understand where they came up with the name.  It was a fiery sting that lasted for a couple of hours and an irritated rash that stuck around for almost 2 weeks!

The weird thing is, fire corals are not coral at all. It’s called a hydrozoans and is more closely related to jellyfish, Portuguese man-o-war and other stinging anemones.  The creatures attach to rocks, coral, seaweed, or pilings and their potent stings are used to stun prey.  Luckily, they have minimal toxicity so I didn’t have anything to worry about other than a little pain.

Now that we’ve bought both cameras I find myself reaching for our Sony the most.  I do think it’s a better overall camera and now I’m kicking myself for not buying the 4k version.  So, if you’re in the market for an action cam I say go for this one http://amzn.to/2vSmGdq  We’ll dive in a little deeper when we do an updated video on our favorite camera gear but for now, here are a few points I noted from the underwater comparison.

Exercise on a Boat

We’re not big into traditional exercising.  We much prefer to get our workout in while doing something fun like freediving, hiking, padding and so on.  But, sometimes the water isn’t ideal for swimming, the wind and waves are too much for paddling or we simply can’t get to land.  So, we need to do something to keep our bodies moving.  We find yoga and suspension training are the two easiest things for us to do on the sailboat.  The suspension system I was using in the video was gifted to us by Jason’s sister and is no longer made.  But, if you are looking for a suspended pulley trainer, I would check this one out: http://amzn.to/2wG31Lj

Great Inagua turned out to be a far more interesting stop that we anticipated.  The snorkeling is fantastic and the endless mounds of salt were something we had never seen up close.  We didn’t bother checking into tours but they do offer them and had we been staying longer, we would have.

Salt production has been Inagua’s main industry since the 1940’s and the Morton Salt Company bought the facility in 1954. A million pounds of salt per year come from this small island.  So, the next time you are shaking a little salt out you can wonder if it was first a part of our salt man. 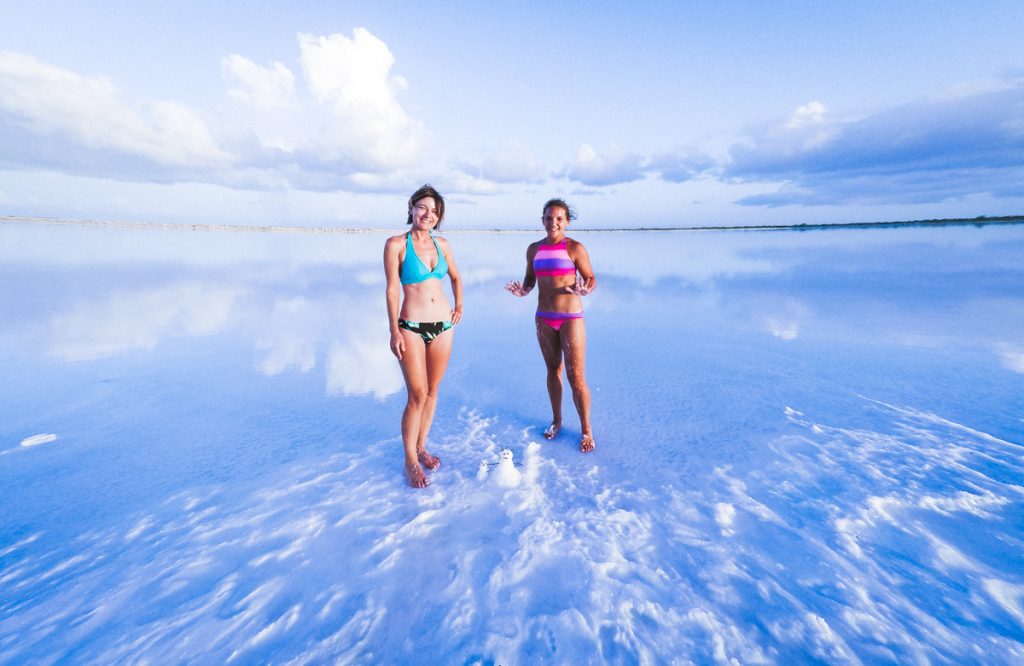 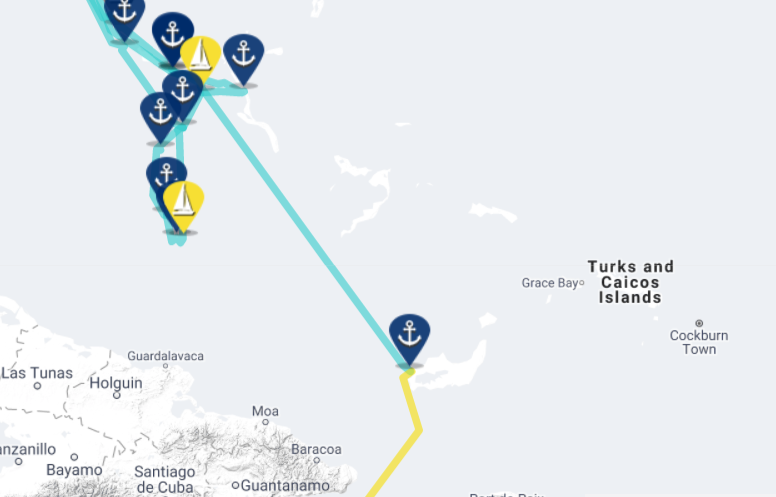 Thanks for being a part of our journey!  If you liked this and want to help us keep the videos and posts flowing, check out our Say Thanks page. It lists out some ways you can show us some digital love and most won’t cost you a penny.