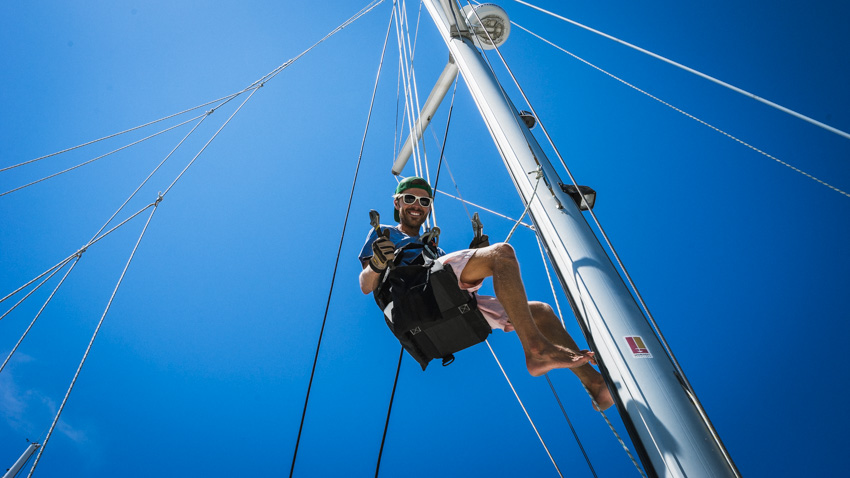 Pulling The Stick, Getting Rigged & A Fresh Bottom

There is so much going on, I don’t even know where to begin…but it’s safe to say we’re doing a ton of work on the boat.  We’re getting ready to set sail on a big adventure and that requires proper preparation (say that 3 times fast!).

Sailing about the world is a voyage that many have done before us.  There are terabytes of books, articles, movies and guides about the subject.   I haven’t attempted to read them all, but it doesn’t take more than skimming the jacket of most sailing books to figure out one very common theme:  Preparation is paramount.

Some of the work we are doing goes beyond preparation but it all adds up to having a safe, sea worthy, passage making vessel.

We’re bound for Panama (and eventually the South Pacific) as soon as Curiosity is ready.  Everything we’ve read about sailing the Caribbean and Pacific, along with each sailor we’ve talked to that’s made the voyage, warns us to have our boat in order before departing the USA.  Skilled workers, and specialized sailboat parts will become very difficult to come by.

So this is us, doing our due diligence, and getting Curiosity as prepared as we can.

As I watch this I am asking myself two things.  First, is what would we do without Kent?  Followed by, what were we thinking?!? There is no way we can cram all this sailboat work into a single month!

The crazy thing is, there is so much more that didn’t make the video.  There must be a million little tasks we’ve done ranging from swapping halogen bulbs out for LED’s to adding additional insulation around the fridge, and even Jason working on the head…again.

Hopefully the video gave you a glimpse at what’s been going on behind the scenes here aboard our catamaran.  In case you’re super interested, here’s a bit more on some of the task being knocked out in the video.

This is probably the biggest one, and luckily one we were prepared for from the beginning.  We discussed it with our surveyor before buying the boat and talked with Just Cats about estimated costs so we knew what to expect.

One thing we didn’t expect is that we would be tackling so much of it ourselves.  If you told me a year ago that we’d be taking apart our standing rigging, pulling down our mast (with the help of a crane), running lines and feeling somewhat capable about it all, I would have laughed out loud.  But here we are…and it feels pretty fantastic. 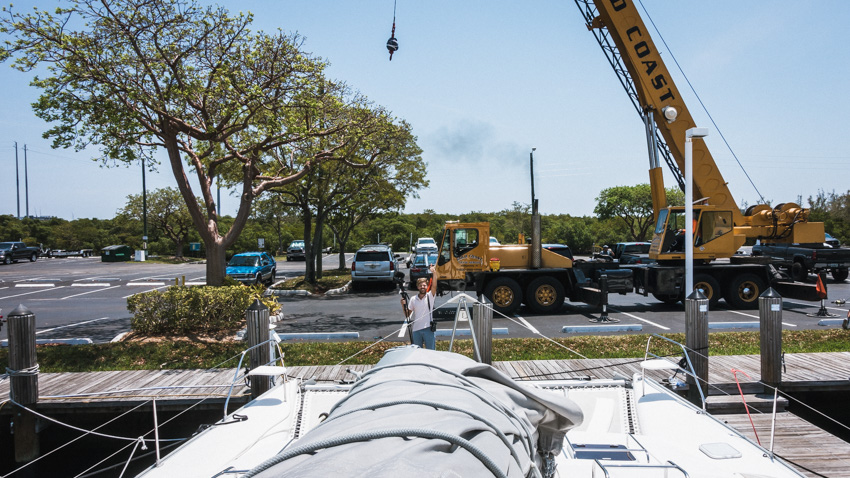 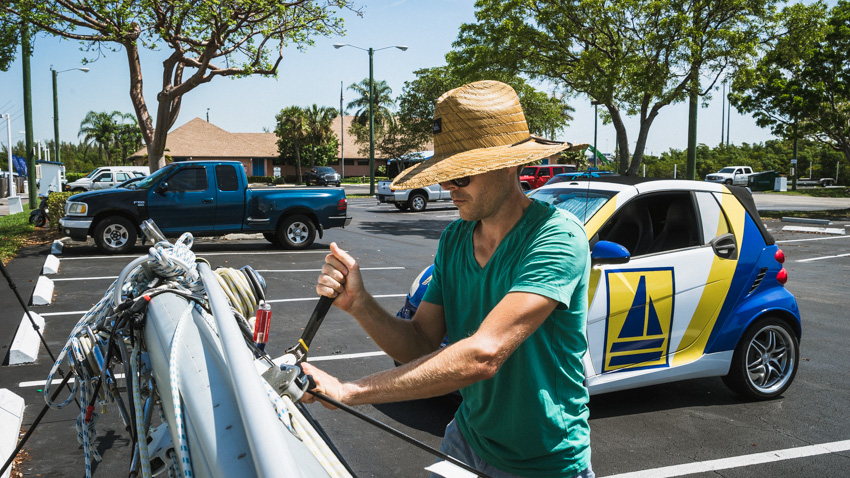 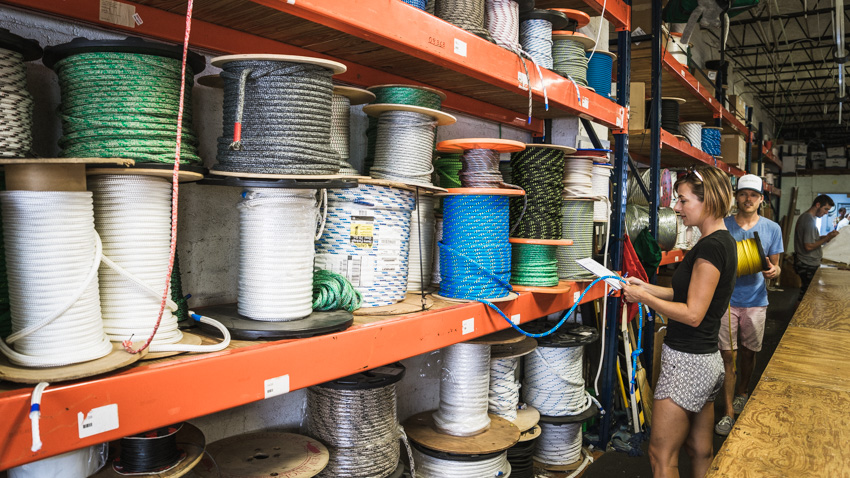 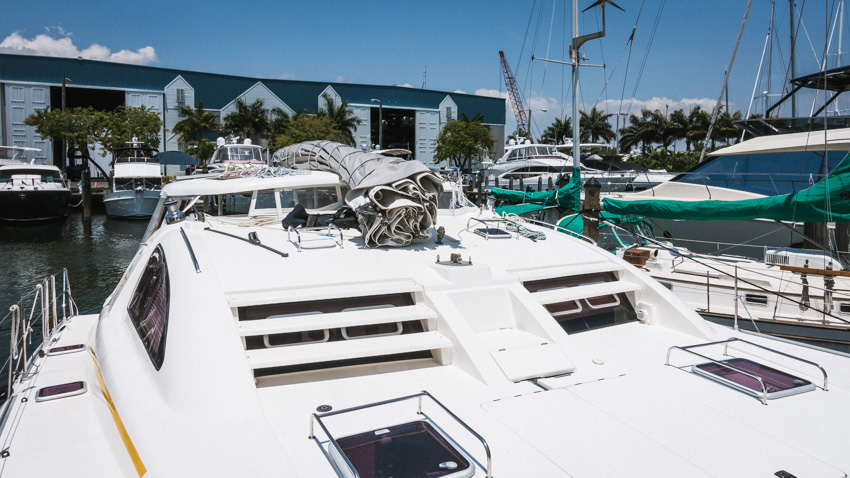 Bottom Paint (aka antifouling) is something that must be done every year or two for us as liveaboard sailors cruising around.  It’s a special paint that is designed to help keep weeds, barnacles and other aquatic organisms from growing on and eating away at our hulls.  There are way too many options out there when it comes to antifouling and it’s nearly impossible for us as novices to choose.  We asked around for recommendations and Pettit seemed to be a very popular choice.  Even still, there are a lot of different options to choose from, even within each brand.  It’s because the type of paint needed depends on a whole bunch of factors including location, weather, use and so on.  We reached out directly to Pettit to help us make that decision.  We landed on the vivid option as it’s supposed to hold up well for a long while and comes in white and black…which mixed together make grey to match our stack pack and stripe.  Because we hear color coordinating makes the boat sail faster. ? 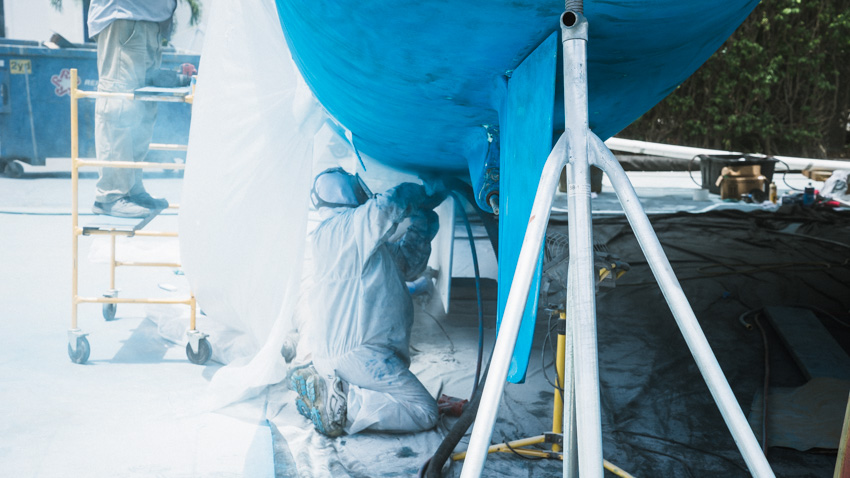 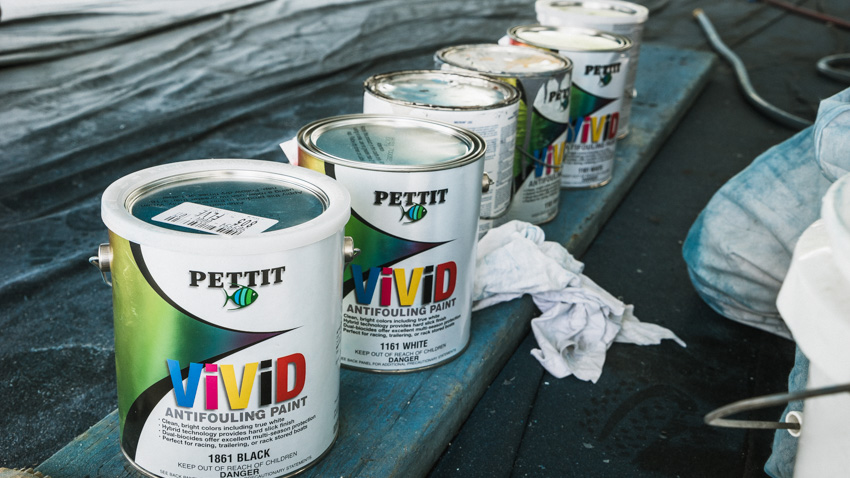 Our mixture was approximately 4 white to 1 black…however we could have gone a little darker, but there’s no going back now.  It will be very interesting to see how long it lasts in the warm tropical waters we’re going to be cruising.

There is nothing like the word delamination to get a boater’s skin crawling.  Luckily, the word can sometimes be much scarier than the actual damage.  We had noticed a pinhole sized spot on our keel leaking the last time we were hauled out but it was right as we were ready to be put back in the water and head off for the Bahamas.  We knew we were coming back to Just Cats for a final round of service so Kent said, “don’t worry about it now, we will fix it up when you come back”.  So, here we are.

That pin hole was evidence of previous damage that had been done a while back and the repair was giving way.  Once sanded down, it’s easy to see what parts don’t look like the others.  Gabby (the fiberglass man at Just Cats) cut away the bad bits, did some grinding and patched Curiosity up with fiberglass like nothing ever happened.  It’s amazing what they can do to fix up a boat to look as good as new. 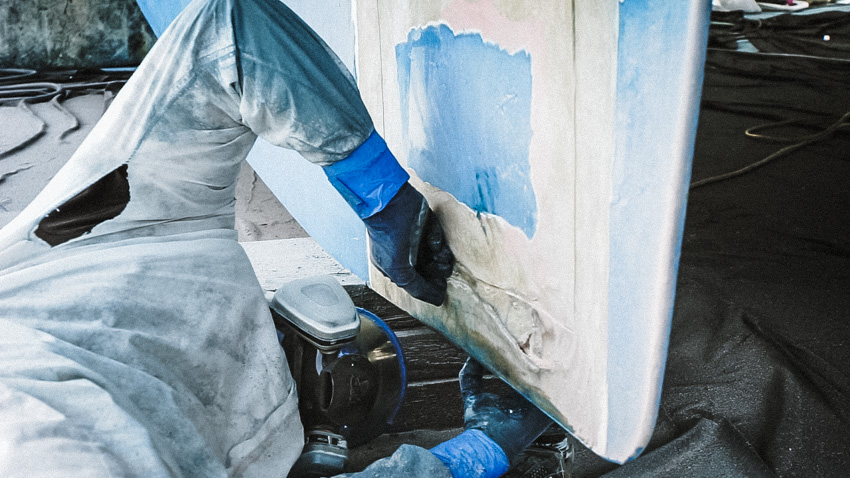 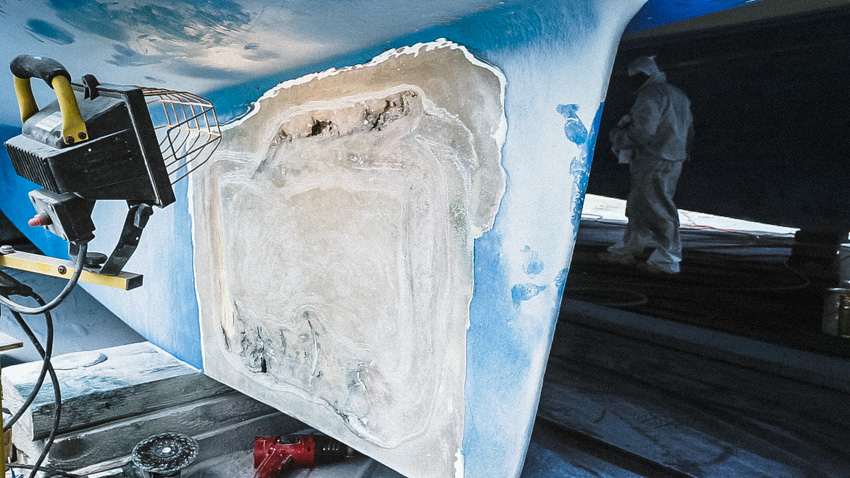 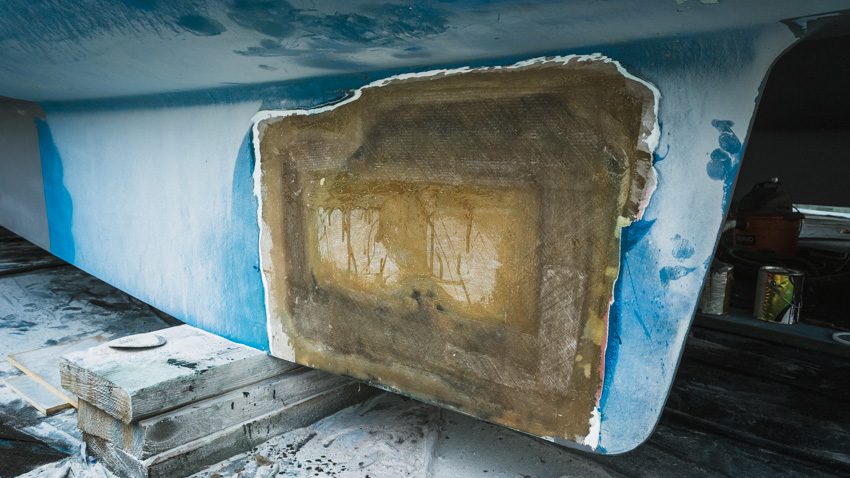 You may, or may not remember Jason mentioning he wanted feathering props.  Kent of course is a big fan of them so he wasn’t helping the situation either.  Jason just couldn’t let it go and kept researching the options while we were in the Bahamas.  He had a long chain of emails going back and forth with Fred from PYI (the Max Prop people).

The final nail in the coffin was meeting s/v Holiday in the Bahamas.  They were a 2006 Leopard 43…one year newer than our Curiosity but the same exact boat.  We were both sailing along the same point of sail, both had spinnakers up and yet, they were going almost a knot faster than us.  They gleefully attributed the extra speed to their folding props and our lack of them.

That was it.  We were slowly getting left in their wake and our fixed props creating drag on the boat were to blame.  Not only were we losing the unspoken race, we were going to arrive at the same destination hours later.  Now imagine a 1,000 nautical mile sail…going one knot faster, we could arrive days earlier!  Which could be the difference between outrunning a storm or not.

Now, I know what you are thinking.  You don’t buy a sailboat to get somewhere fast. True.  But, there are other benefits to the feathering props (including less wear and tear on our bearings, shaft, transmission and so on) but we will talk about all that later, once we’ve had a chance to fully put them to the test.  Update here:  https://www.gonewiththewynns.com/product/feathering-props 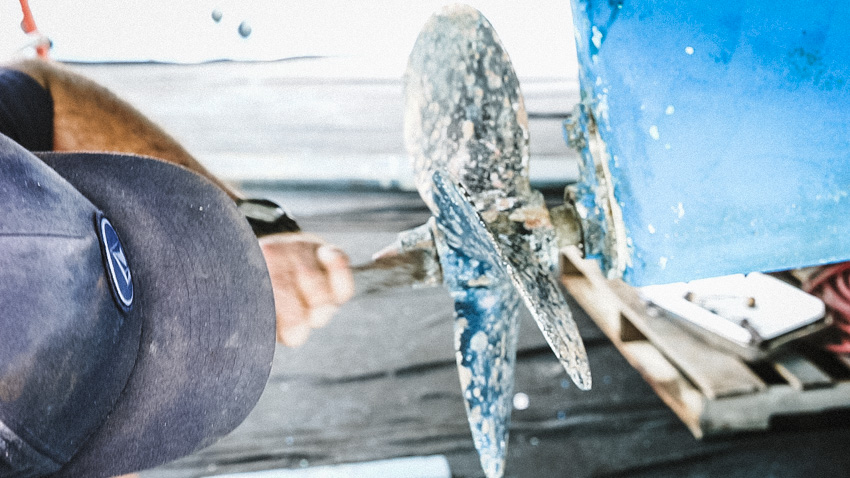 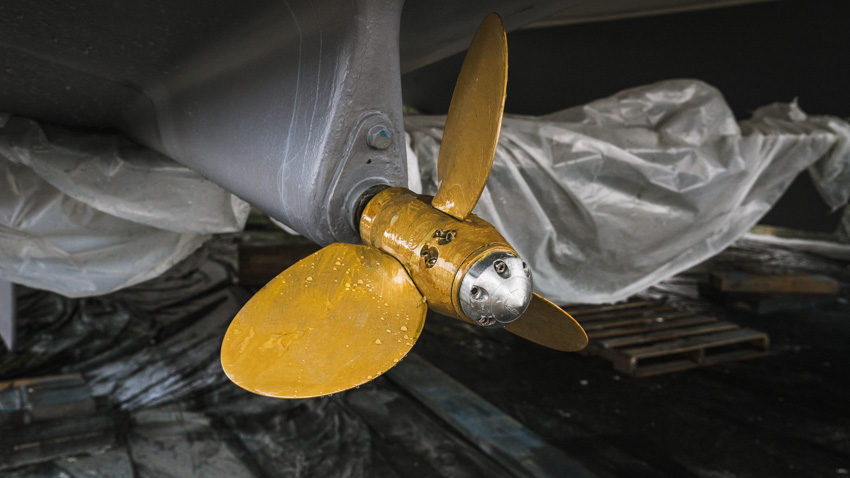 Kent gently mentioned several times after purchasing our boat we should consider adding rub rails.  At first, we thought “why do we need rub rails when we have fenders?”.  It seemed like a nice thing to have but not necessary.  Fast forward a year later, one nail gouge in the fiberglass and several challenging and unfriendly docking situations and now we see the light.  Not all docks are kept in tip top shape, have rubber guards or are in convenient locations.  One round of docking up against concrete on a rocky day and rub rails are looking real cheap in comparison to major fiberglass repairs.

Now we have rub rails and I can’t even tell you how much less scary docking is, although we haven’t come face to face with another concrete dock just yet.

We didn’t get underwater lights for the cool factor (of course they are cool) as much as for the safety factor.  So many boats we met in the Bahamas had underwater lights they used to light up their boat when boarding the dinghy at night (super helpful) and making their boat easy to see and avoid in busy or high traffic anchorages.  Then there was the cool factor of attracting fish and being able to see what’s going on down in the water world below at night. 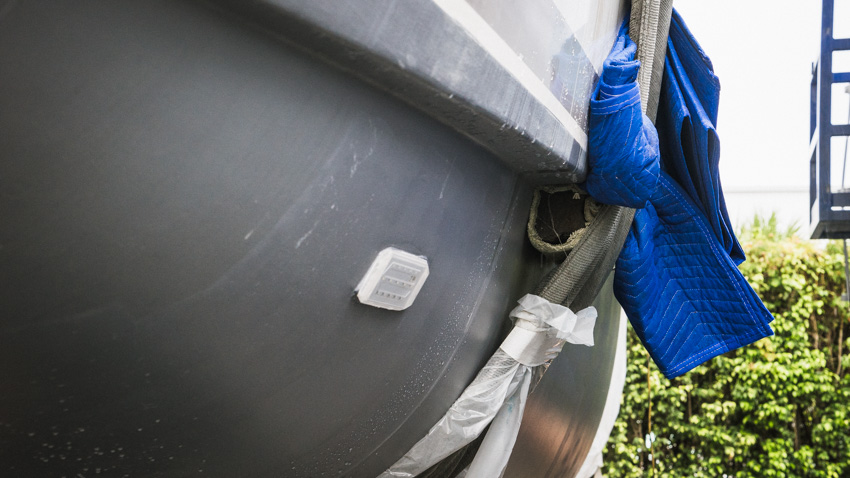 A small leak will sink a great ship

When Benjamin Franklin said, “Beware of little expenses. A small leak will sink a great ship.” he was referring to finances but the literal sense is true too.  The small stuff may be small but every little thing on a boat serves a purpose and needs to be maintained all the same.

For example, cleaning, lubing and checking the oil on the anchor windlass.  No one I talked to knew how to do it.  It’s listed in our user’s manual to service the windlass every 6 months to a year as full-time cruisers (but didn’t give instructions on how to).  Obviously, it’s not something most people I was talking to were doing.  Lots of people even responded with “it has oil?”.  Luckily, I found the instructions by googling our make and model.  It was a reminder of all the little things that should be done but are so easy to ignore or forget. 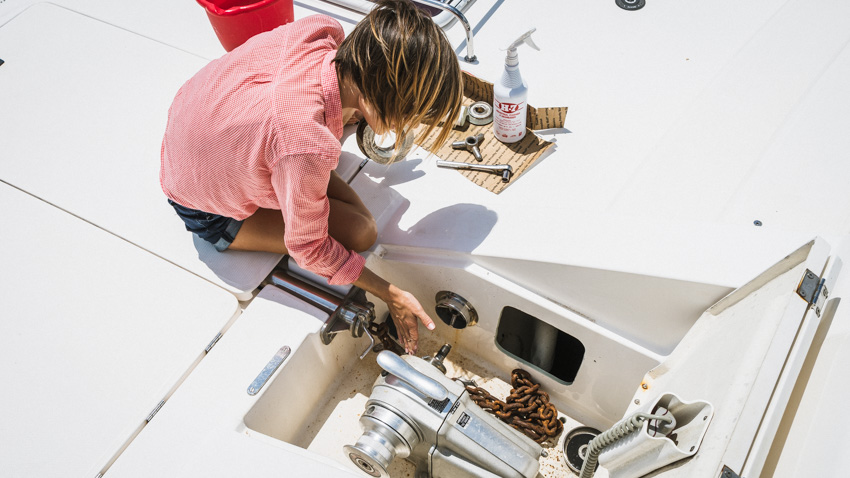 Thanks so much for reading, watching and being a part of the journey.  I know we’ve been a little quiet on social media, late putting together new videos, etc. but its only because we’re working hard on Curiosity.  This next phase of the adventure is going to be incredible and the prep work will be priceless.  Or so I am told by souls much saltier than mine.