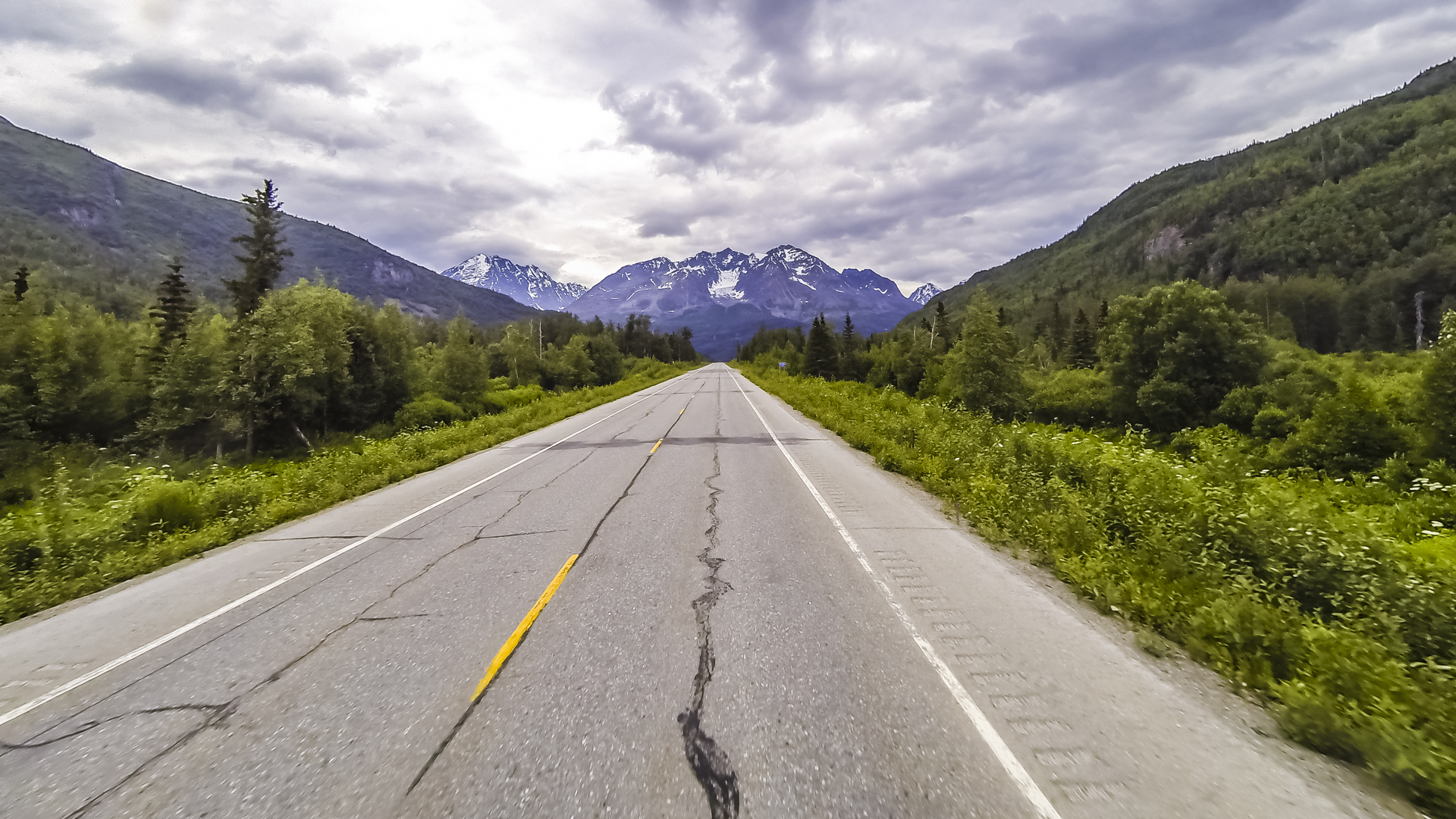 Last year we created a video and wrote an article putting a Gas RV in a head-to-head smackdown with a Diesel RV and it went over pretty well.  But at that time we had never used, or lived in, a gas motorhome (we’d only test driven a gas coach) so we asked ourselves: how can we truly weigh in on the performance of a gas rv?  Well…we couldn’t, until now that is.

What is it like to drive a Gas RV?

On our way to Valdez, AK we came down the Richardson Highway with it’s long hills and thought This is the perfect spot to setup the cameras and let people virtually hop into the RV with us as we leave town. There’s a little bit of everything here: Long inclines over Thompson Pass (100ft – 2800ft elevation), short rolling hills, beautiful views, Alaskan wildlife, bad roads, nearly perfect roads and so on. Without further ado, it’s time to hop in and buckle up.

Why we never considered a gas motorhome in the past.

It all boils down to one statement from one man whom we respect.  Here’s a quick setup:  Nikki’s uncle Mike is frugal, shoot I’d even call him downright cheap when it comes to certain things. Although he might argue and say he’s smart with his money…so insert your favorite ‘thrifty’ term and you get what I’m saying.  Nikki’s aunt and uncle were the first people in the family to buy a motorhome and invite us to see it.  Mike was so proud of his new motorhome and boasted gleefully what a bang-up deal he got on this brand new Ford V-10 gas powered RV.  (This is where we decided we liked the idea of RVing)

Not more than a month later we saw Mike again and he said this one (paraphrased) line:  I drove it to Colorado through the Rocky Mountains and I just about pissed my pants chugging up the mountain at 20mph while giant semi-trucks flew by us on the left.  Ya see, he drove that under-powered gas RV to Colorado, turned around and drove straight back to the dealership in Texas, happily bent over and said I need a more powerful RV, this piece of junk just ain’t gonna cut it.  I am paraphrasing here again but you get the jest of it:  Mr. Frugal took a huge financial hit by switching RVs, but he said it was worth every penny to upgrade to diesel.  Now 6 years later he still has that same diesel RV and loves it.

I like to learn from others mistakes, especially when it saves me money, so from that day forward we never even considered a gas RV.

My first Gas RV experience was in our House Hunters Episode where I didn’t leave the RV lot and my second experience was driving around the block for the Gas vs Diesel Smackdown.

What’s the verdict on a Gas RV vs. Diesel RV Smackdown?

Now that we’re testing out the new Bounder everything has changed!  Since we picked this coach up in May 2015, we’ve thrown ourselves into the Gas RV world head first and we’ve taken this beast on the most epic of RV road trips:  ALASKA.  Nothing like trial by fire, right?

I’ve decided to create this post and update it based on our experiences in our first gas motorhome. (you can learn why we are in this coach here) I don’t know how often I’ll update it but when I have an experience worth sharing it’ll end up here. If you want to keep in the loop make sure to subscribe and we’ll shoot an email when changes are made.

I won’t be talking about creature comforts or features here (cause those change drastically based on the manufacturer), just the ups and downs of the chassis side of our RV. One thing I do know:  At the end of this big trip, and at the end of our test period, I’ll have some very strong thoughts on the good and bad of buying a Gas RV.

The Good and Bad of a Gas RV

With the price being so much cheaper I can see why people on a budget would consider a gas coach, heck for 40 grand you can travel to a lot of places!  Based on our experience so far I’m thinking this gas coach thing isn’t so bad and I could totally get used to it. That said if we were to purchase today we’d most likely put our money into a diesel motorhome.

Over the past couple months we’ve had multiple chat sessions with people that are debating on Gas or Diesel for their new RV and there’s always one “curve ball” they throw in at the end:
What if my total budget is $150,000 and I can’t spare another cent on the purchase price?
I typically respond with this exact answer:
It’s not about which RV is better, it’s a question of how you wish to camp with your new Motorhome.

My goal with this article is to be totally open here by sharing our experiences and honest thoughts of driving and living with a gas powered RV. We hope through sharing honest opinions other future RVers can more simply make the call when it comes to buying a Gas or Diesel RV. We’re not saying our way is the best, or our opinions are the only ones out there, it’s just the best way we know to get the conversation started.

What’s your take on the whole gas vs diesel debate? We’d love to hear any thoughts from fellow past and present gas RV and diesel RV owners.

Disclaimer – We do not own this bounder, it is a test coach. You can learn more about why we are in this coach here: Resurrecting Dinosaurs – The Story Behind Our RV Design 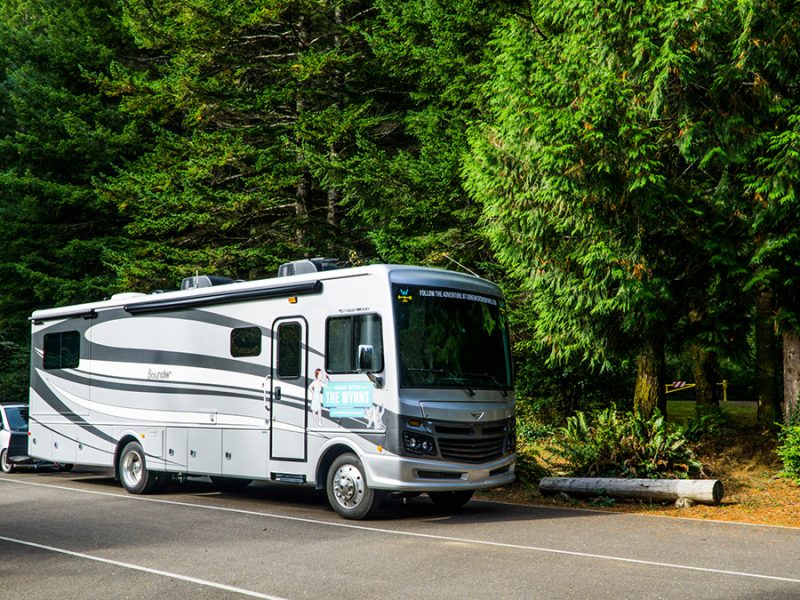 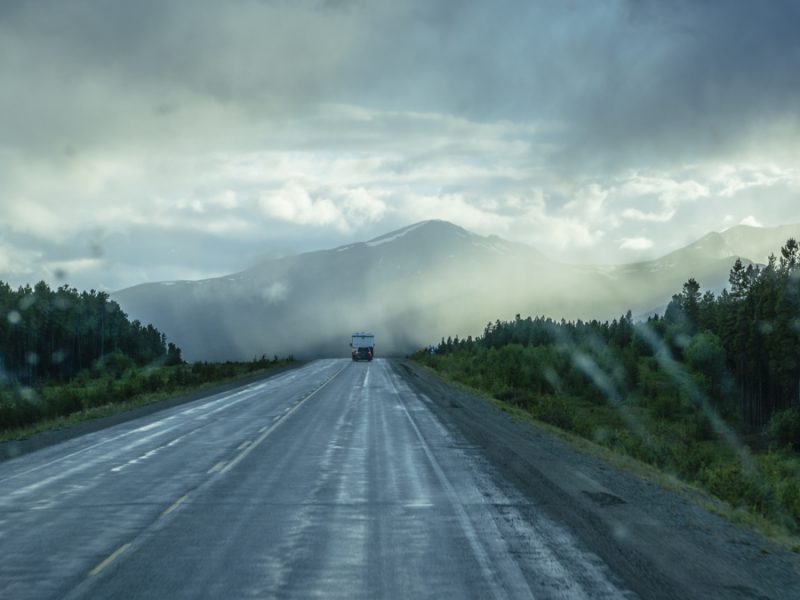 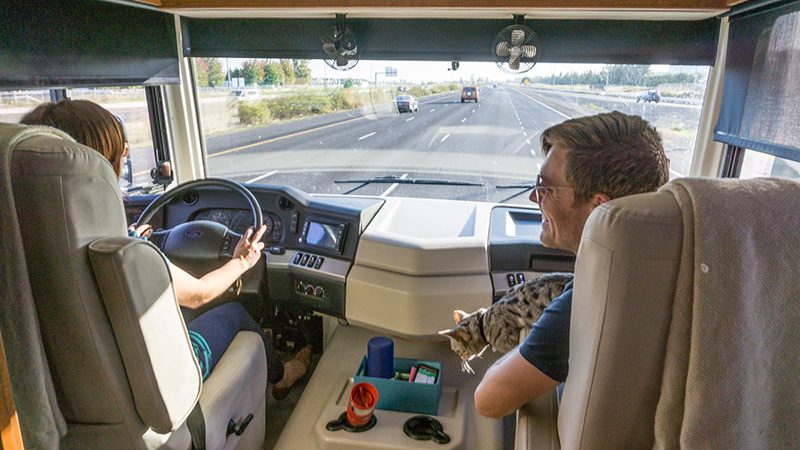